One hour drive west of Ballarat, just off the Western Hwy, 25km from Beaufort. 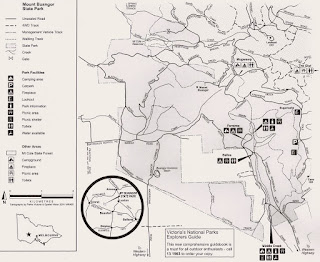 Park Victoria Map
The 3 day and 2 night walk plan:
Day One:  Start at Chinamans Campground, north of Mt Buangor
Head south about 2km with some off-track to reach the begining of Mt Cole Reservoir Walking Track.  From here, follow the track down to the reservoir and continue south then gentlely up to Mt Buangor (987m).  Mt Buangor Walk to Ferntree Campground (night 1) past waterfalls is about 4km (about 2 hours).
Day Two:  Ferntree - Middle Creek - Cave Hill Tk (upper level walking tk) - Sugarloaf Tk - Beeripmo Camp (night 2). If early, continue on to Mugwamp Camp
Day Three:  Leave Beeripmo or Mugwamp Camp and head north back to car. 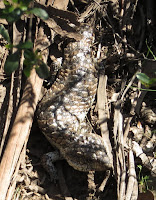 The lizard seen on the foot track down to Mt Cole Road on day two
Overnight Walk Chinamans CG - Mt.Cole (Ararat) Reservoir - Chinamans CG
Day One:  We did not make the walk as planned. At the end of day one, we arrived at Mt Cole (Ararat) Reservoir in late afternoon, well behind schedule because we had a bit of the problem to find a reasonable way through. Hence, we decided to call it a day at the reservoir.
I was rather slow because I had not done any pack carrying for a while, the walk was on and off the track, the terrain was steep in some places and we had a quick stop for a drink at the creek near the Pinch and Dutchman track junction and at a high point for the view over to Mt Langi Ghiran in the west.

It was rather windy in the evening and we had a dehydrated green curry for dinner. Then, it was a beautiful moon light at night and we hit the sack about 9.00pm after a short discussion about the next day's options: either to walk to Mt Buangor and explore around the area with a day pack or walk around the reservoir.
Day Two: I did not sleep as well as the night before at the Chinamans CG because I forgot to zip up the sleeping bag and so felt a bit cold and woke up during the night.
We had porridge for breakfast and it was a pleasant, calm, sunny morning. Looking around, at the reservoir, the wall, the mountain ranges and the search for a camping spot yesterday, I could see that it was possible to continue on with the initial plan but it would have taken long. The option to explore around the reservoir was also abandoned. The option of going to the Mt Buangor summit and Ferntree Waterfalls sounded more inviting. Hence, we decided to walk back to Chinamans CG via an alternative route. The walk on day one followed a mostly non-existent and unmaintained track and took a lot of time to follow. The return journey mostly followed existing tracks but with many opportunities to short cut some corners to save time. We arrived early at the free Chinamans CG 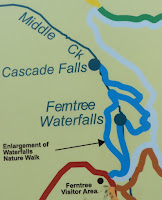 Day Three We drove from Chinamans CG to Mugwamp Hut and parked. BYO water at Mugwamp Hut. We took Buangor Track to the summit and the lookout side tracks and walked back via Mugwamp Track as shown in the map above.  There is a cairn and a ruined hut at the summit 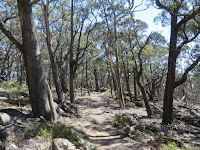 Mt Buangor Track and the cairn at the summit

Langi Ghiran from Mt Buangor Lookout
We then drove from Mugwamp Hut to Ferntree via a long 2wd loop to avoid the 4wd only tracks. At the Ferntree Picnic Ground, the Cascade Falls loop is clearly marked. The walk itself is rather steep in places but has stairways to make the climb easier. It is worth the climb to see both the falls and the cascade. 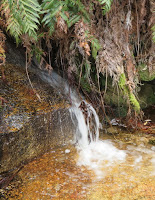 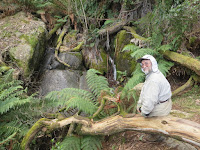 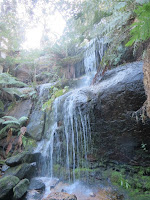 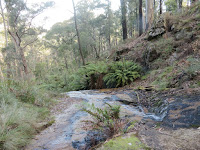 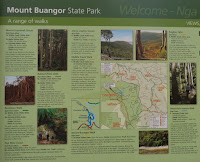