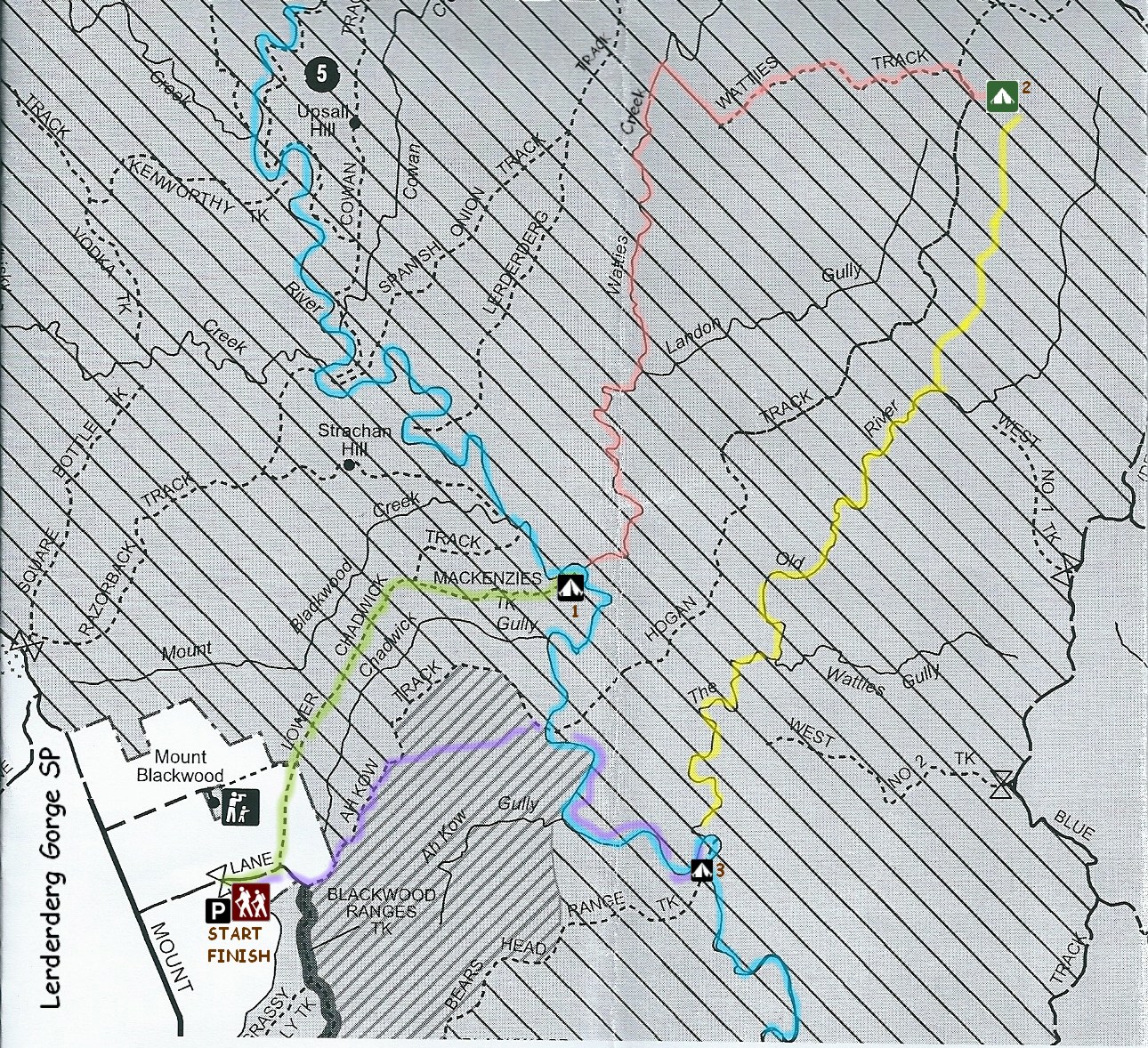 I left the car at the end of Lohs Lane, at the track entrance with the signpost, then followed the vehicle track (mainly for Park Rangers & local residents) for about 250m to a gate, at the junction of Great Dividing Trail (GDT) and Blackwood Ranges Tk. Next to the gate is the entrance to a private property. I went through the gate and followed the fence-line heading north for about 800m to the gate with a signpost to Lower Chadwick Tk. There was an orange triangle marker at the start of the track. 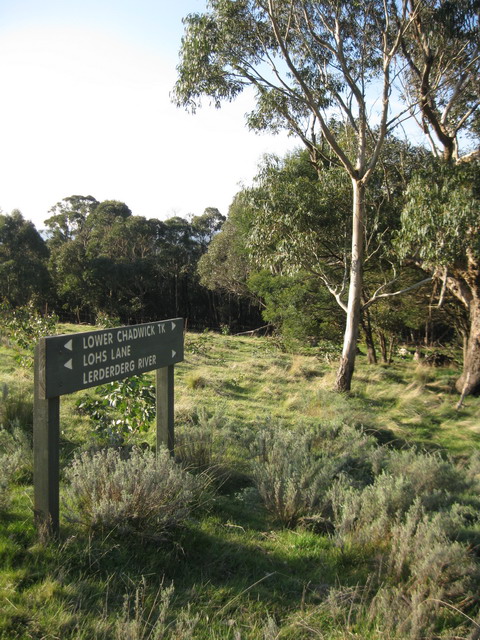 It was an open and dry forest and the track is easy to follow to the signpost showing the way down to the McKenzie Tk (Lerderderg River 1.6km, 240m descend). 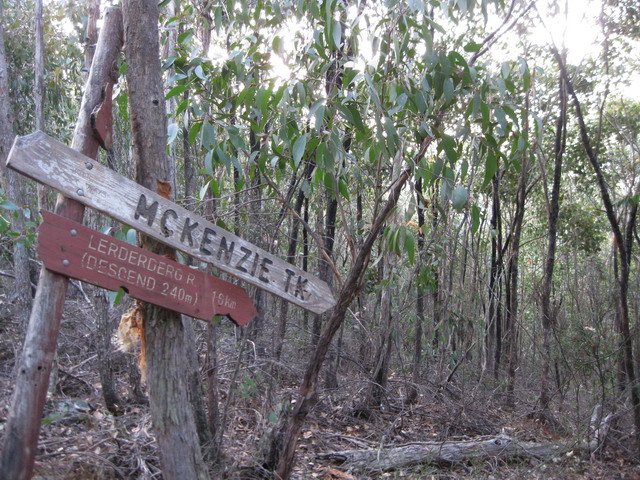 It was slow going because the foot pad is narrow, loose gravel and uneven. Luckily, it was a sunny day and my walking pole was put to good use. Finally, I got down to the bottom of McKenzie Tk which ends at a large grassy flat with a campsite near the Lerderderg River. 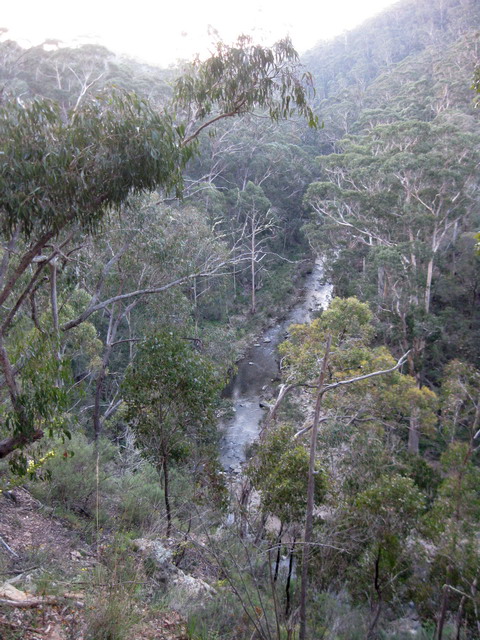 The Lerderderg River from McKenzie Tk

I cooked and ate dinner just before it got dark (about 6.15pm in early Spring). Usually after dinner, I check out the information for the next day walk such as coordinates, maps, and track notes. The night temperature was quite comfortable and I had stayed up late the night before; therefore, it did not take long for me to fall asleep. 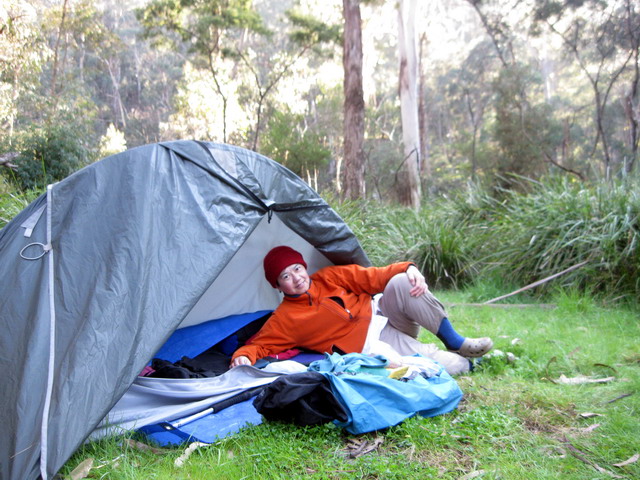 Me at the campsite above Lerderderg River. 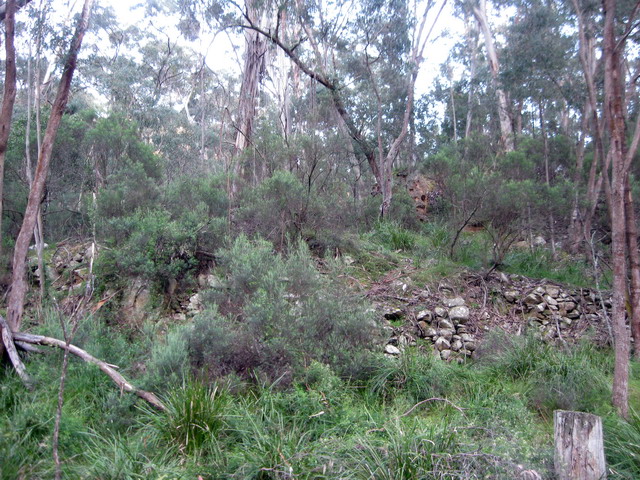 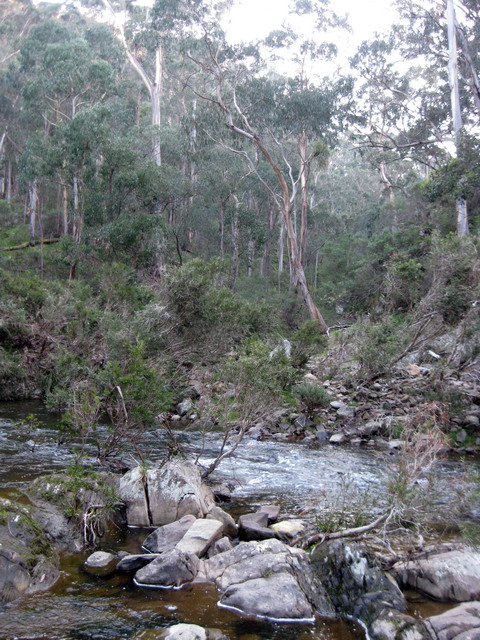 The start of the next day was a bit late due to the time spent on taking photographs of the picturesque Lerderderg River Gorge, exploring the old mine (opposite to the entrance of Watties Creek) and trying to find a suitable spot to cross the river. The water level in the river was just knee-deep; so the crossing was rather comfortable. When I got onto the other side of the river, I was assured that I was right at the entrance of Watties Creek by the notification “beep” from the GPS with the pre-loaded “Walk17 Clearwater Creek” GPX file from the Open Spaces website. Here is the link http://osp.com.au/?page_id=1603

The going was very straight forward, mainly following the dry and rocky creekbed. The first 2km was rather winding and shortcuts could be made by crossing scruby flats. There were also some inviting rockpools on the way and these were opportunites for photos and lunch stops. 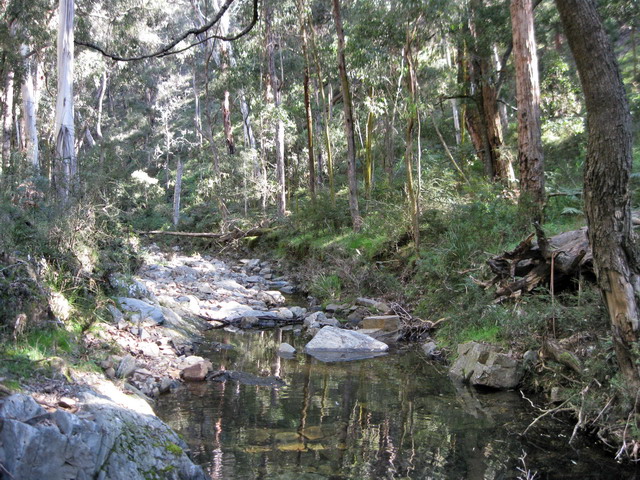 I walked a further 1.7km and reached an old vehicle track crossing the creekbed. Keep an eye open for a large boulder on your right, marking the junction (there is possible camping here for those starting from Lohs Lane).

Ignore the steep track on the left (Lerderderg No.2 Tk) and leave Watties Creek but don’t forget to collect water for cooking dinner and breakfast for the next day. Walk past the boulder and follow a short path which is parallel with the dry creekbed. This leads to a disused vehicle track known as Watties Tk. Walk up the 100m of the steep and eroded track. 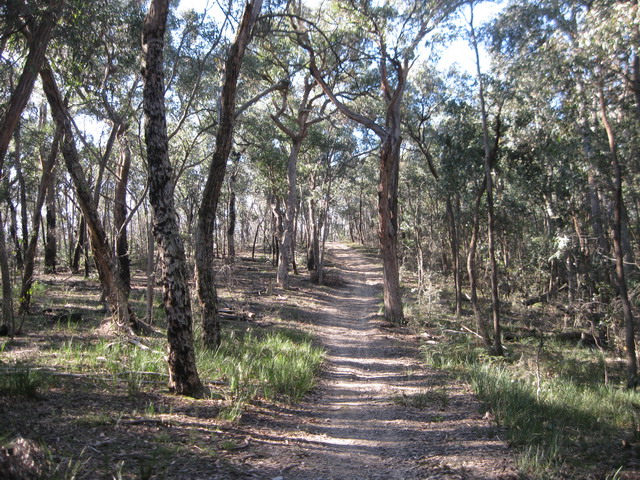 Continue on the track for about 3km of ups and downs through an open and attractive forest.  The track ends at Hogan Tk.  At this junction, turn right and walk 100m further to the No.3 Track.  There are many possible camping spots along this track 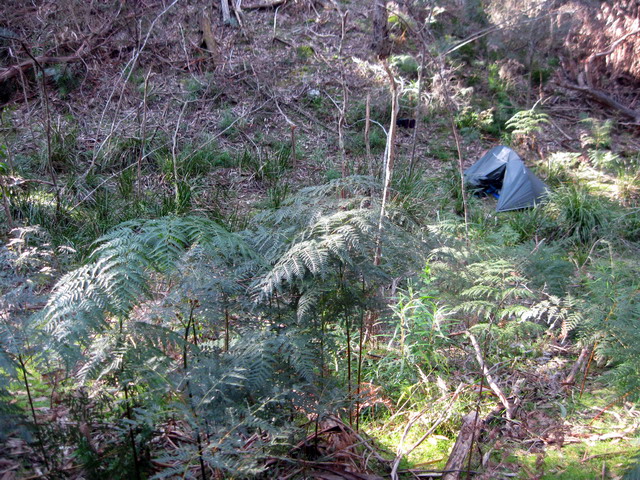 The No.3 Track is a disused vehicle track. The start of the morning was a very steep walk of about 100m south by south-east down to the bottom of the track which runs across the northern part of The Old Riverbed (Duncan Creek on Forests & Lands map Lerderderg Gorge 1:25k).

Like yesterday, walk along the dry and rocky Watties creekbed. Walking in the northern part of the Old River was somewhat slower due to more scrub; but it is less rockier. 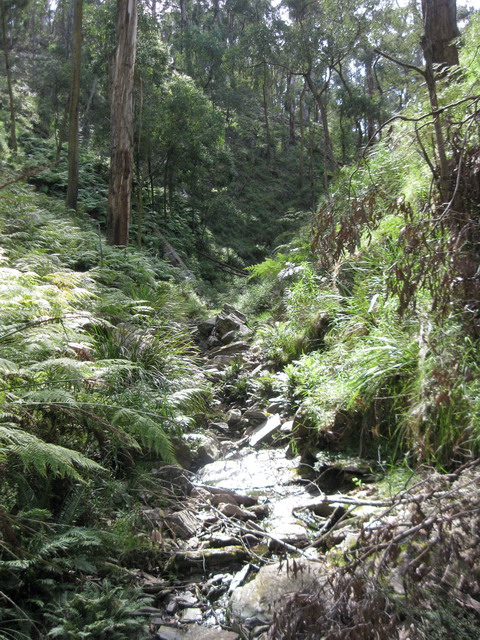 The northern part of The Old River

And also like the southern part of the Watties Creek, the Old River is dry & rocky and has many bends. The going on the grassy flats is rather more comfortable. I took time to enjoy the scenery along the riverbed with gorge views and rockpools. 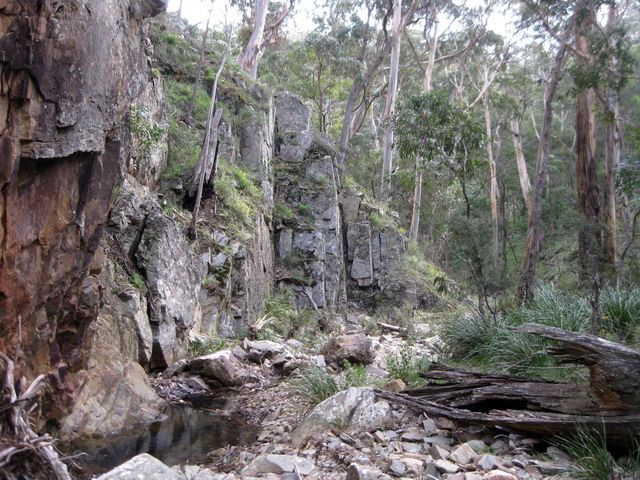 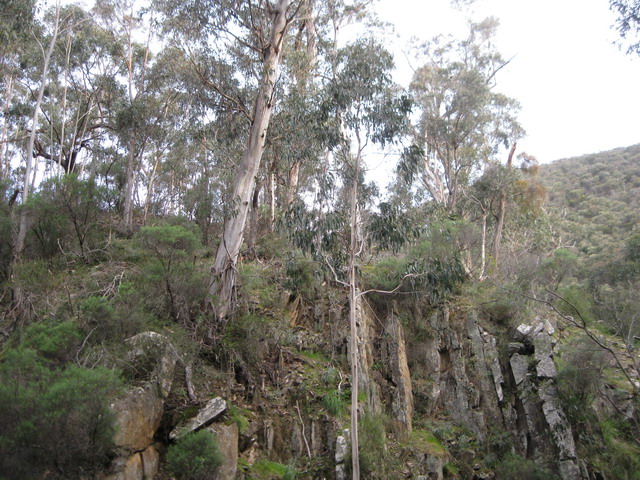 The middle section of The Old River


I thought of camping at this gorgeous location; but it was still a bit early. Hence, I kept going until I arrived at a spot which was close to the waterfalls, based on Map17 Watties Gully Falls in “150 Walks in Victoria This is the access to the climb up along the spur heading towards Hogan Tk, in order to get down to the campsite by the Lerderderg River. I then decided to set up camp here because it was getting close to sunset and there was a waterhole nearby (some evidence of the dry waterfalls?). It was a quite relaxed evening and I had a reasonably good night sleep.

The "waterfalls" area in The Old River

The way up - Lerderderg River

The option of walking a little bit further to the waterfalls (according to Map 17 Watties Gully Waterfall) and/or following the riverbed was abandoned due to the sudden change in the weather. It is unwise to walk the riverbed in slippery, rainy conditions. 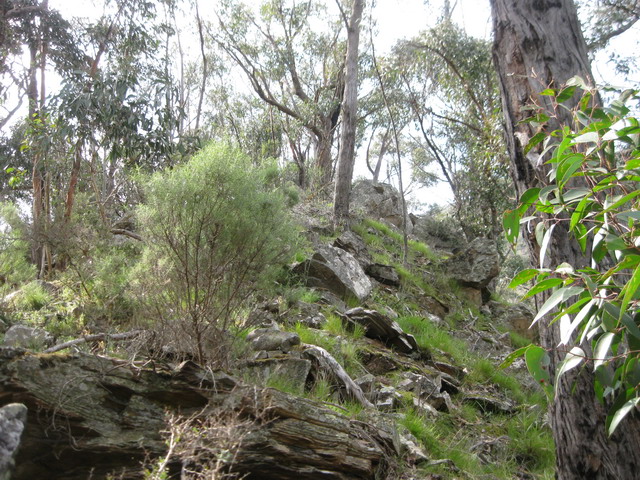 Up a spur to reach Hogan Track

The start of the 400m climb is steep and rocky. A few stops were made allowing me to check the compass and look back down the dry riverbed. At one point, I saw a medium sized, flat stone, that suggested to me that it was intended as a marker. 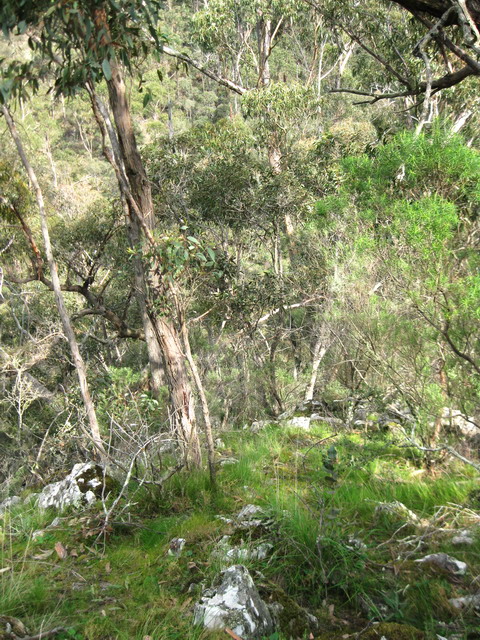 Looking back down to The Old Riverbed

Further up the spur, I realized that I had made a mistake in attempting to climb the steep slope. I gave up climbing the steep spur and heading to Hogan Tk, following a scrubby pad which turned northwest for a while. I am not sure what went wrong. At the gps coordinate check, it suggested to me that I was located southeast of the waterfalls. At this point heading to Hogan Tk was not a wise option and I decided to go south, heading to the most southern part of the Old River and then followed the riverbed out to the entrance at the junction of the Old River and the Lerderderg River Gorge. 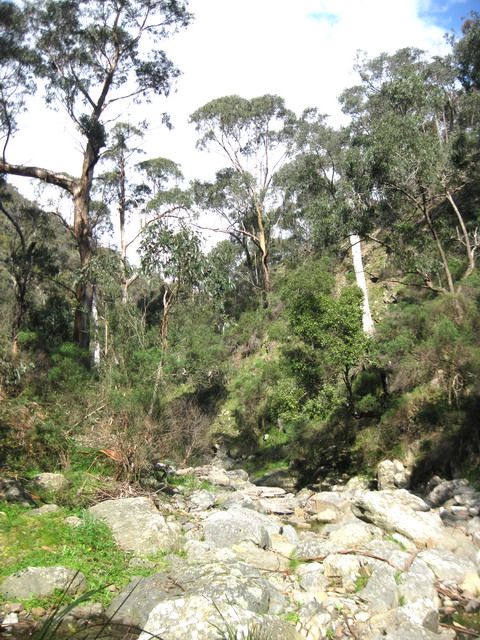 Back to the river's bed 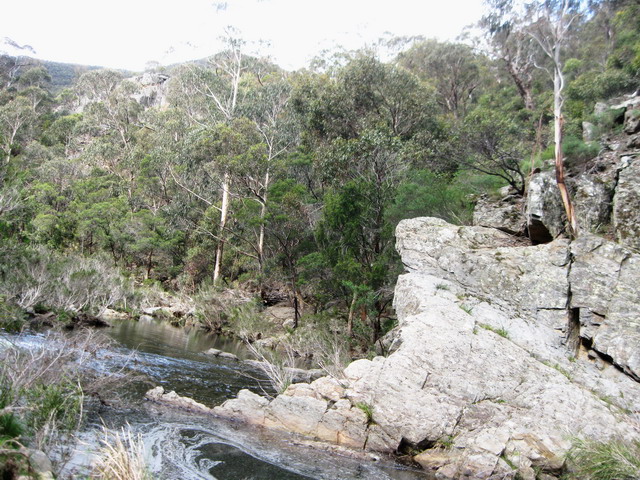 If you find that the cliffs are hard to negotiate, then walk back down to the river and find a suitable spot for a crossing. In this case, walking with few others would allow you to share the task of investigating possible safe routes.

Due to the slow going along the river and trying to catch up with daylight, I kept moving on and a mistake was made that I did not stop at the site of a ruin and so I did not see the path that led to the campsite, above the river, because my eyes were blinded by the sun. I walked a little bit further and ended up camping on an open rocky and scruby flat with a small flat spot that was not even enough space for one person tent. It was getting dark and I had no choice. 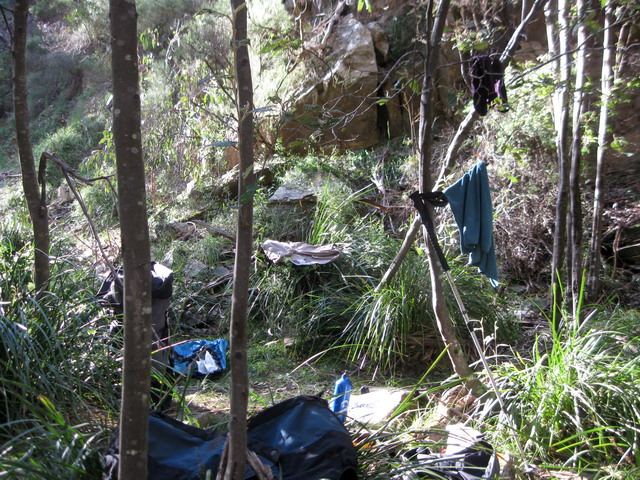 
After a long day filled up with extreme activities, I checked the gps coordinates, and found that Ah Kow Ruin & Mine campsite was just about 70m away and the start of Ah Kow Track was just on the other side of the river. I was tired and retired early; but woke up at about midnight and tossed and turned until dawn. It was a chilly morning. . 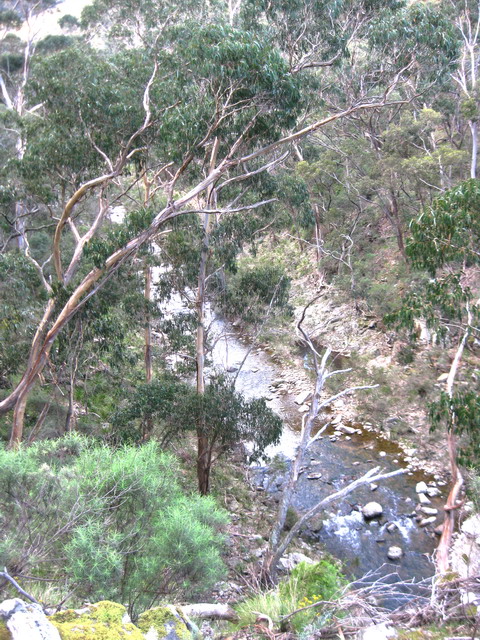 Lerderderg R from the climb up Ah Kow Tk

As for the previous mornings, I started a bit late. It took just minutes to walk back to the Ah Kow Ruin where I could have a close look at the river conditions for the crossing, and locate the Ah Kow Track After spending a bit of time checking the campsite area, I walked back down to the river and found a safe spot to cross. The river was knee-deep, hence, the crossing was rather easy.

The first 1km of the Ah Kow Track is very steep and the gravel surface makes the climb harder, especially for those that are loaded with heavy packs. It was not easy to follow the track for the climb. A few zigs zags had to be made to make progress.

After about 200m, I followed a foot pad, heading west, and I went cross-country from there until I reached the top of a knoll where the Fire & Telecom towers at Mt Blackwood came into sight. The forest was dry and open and therefore the going was quite easy, and I finally reached Ah Kow Tk about mid afternoon. 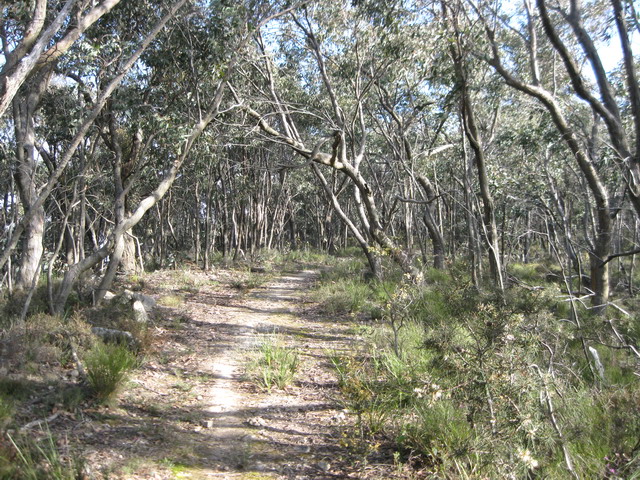 The Ah Kow Track, at last!!

From here, it was an easy walk to the starting point, where I was greeted and given a nice wild flower from a little girl whose father was in a quad bike just metres away. 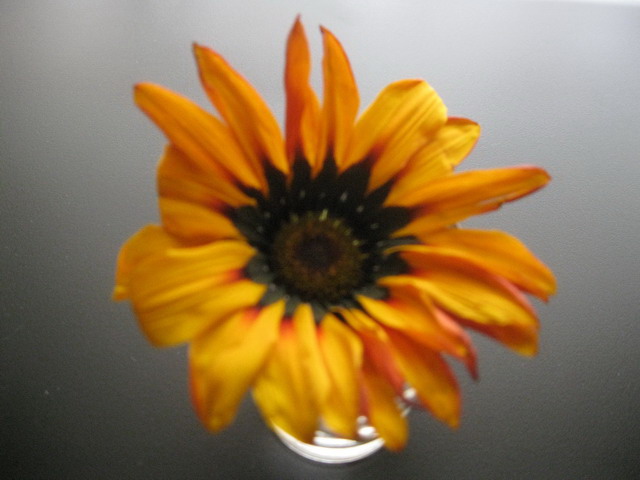