Moroka Gorge over the long weekend

We arrived at Horseyard Flat campground on Thursday 5th April early enough to find a nice grassy spot.  Good tent-sites along the river had already been occupied by campers and day walkers. 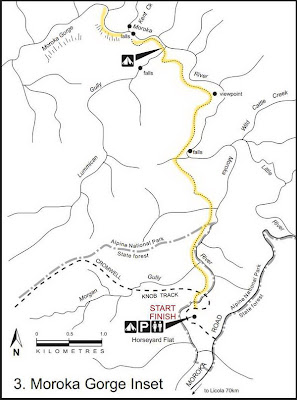 ParkVic's map with the marked route taken on the trip

On Friday, it took us about 10 minutes to locate the start of the Moroka Gorge walk with a sign post and an intention book.  The walk starts with a pad leading through attractive bushland to the first waterfalls and ending at Lummican Gully. 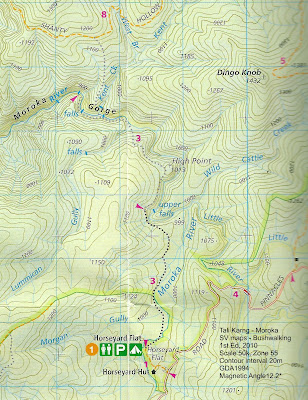 Foot pad near the start

We met a family of four on the track and they were on their way back to the campground.  We were told that there was a brown snake near the track just before the waterfalls and about 150 metres away.  We never saw it!

We had a lunch stop at the first waterfalls, at which we met two overnight walkers, who also stopped here for lunch.  From here, the track became rough (and slippery when wet). 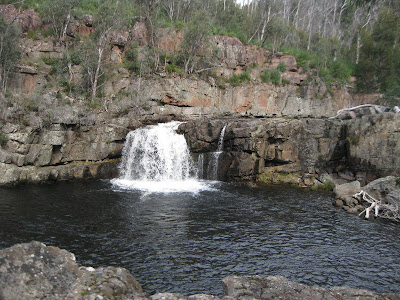 First falls in the Moroka Gorge 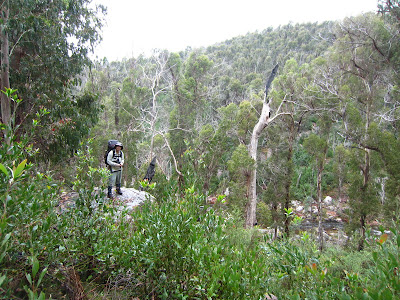 Me at a view point near the track

On arrival at the Lummican Gully camp, we found that the track was no longer a track.  Here, we and the two walkers we met at the waterfalls, faced the same problem to locate the route into the gorge: the high route or the one along the river bank.  The high route was rough steep and scrubby.  The low route seemed to be blocked by the high river and boulders. 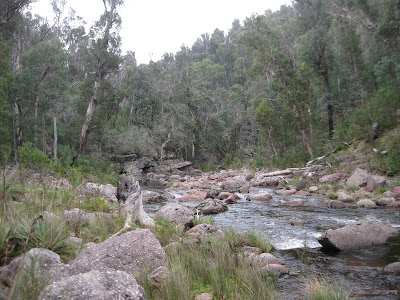 From my memory of a trip with YHA bushwalkers over a decade ago, when the high route had been tackled, I determined to take the high route with the use of a GPS and a compass.  The aim was to head northwest to the junction of the river and Kent Creek, the start of the second day in the initial walk plan.  It was rather slow going on the rough ridge and we had one or two stops to check location.  It took about 20 minutes to find a reasonably safe access down to the river.  A GPS waypoint was marked here just in case it was needed for the return trip. 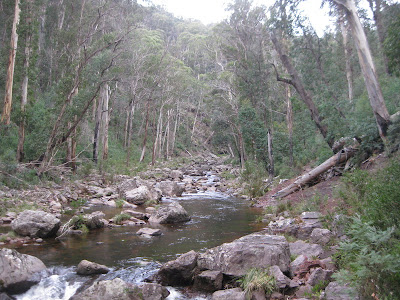 The fallen log on the right river bank, where we came down from the high route

Once we reached the river bank, we rock hopped and scrambled about 100 metres along the rocky river bank to the second falls with a lookout which provided good views of the river gorge and cliffs.

Knowing that we were not far from the turnoff to the third waterfalls, and also the access up Dawson plateau and Snowy Bluff, we left our packs here and started looking for a campsite and exploring the river and route conditions for the next day.  A challenging access was chosen for investigation and we found two ways to get down the cliffs without the use of rope. The water level seemed reasonable and looked "do-able" in late afternoon.  We had no luck to find a better campsite than the one where we left our packs; therefore, we decided to pitch tent up there on the rock on the top of the cliffs. Me at second waterfalls 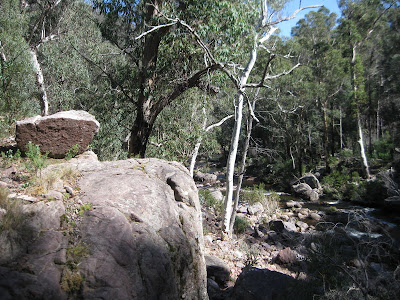 Good views from our camp


We had tuna, coucous, and pudding for dinner.  After the meal, Allan had fun with fishing and one brown trout was unlucky to get caught but it was quickly set free after being posed for the camera.  A bit later we were surprised by a platypus which was zig zagging in front of us along broken rocks to get into the river.  An amazing experience!

It was so peaceful here, apart from the sounds from the waterfalls flowing in full strength and the high winds during the nights. 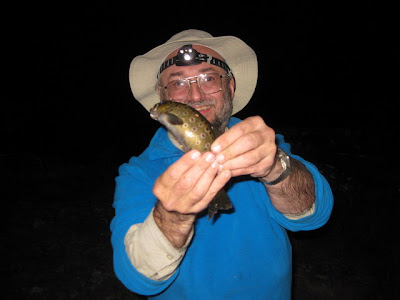 
On Saturday morning, the river was a bit high and fast flowing and Allan was not keen on a river crossing; therefore, our plan to go to Dawson Range, one of the routes up Snowy Bluff was cancelled.  We could see the third waterfalls from the junction and so there was no need to cross the river. 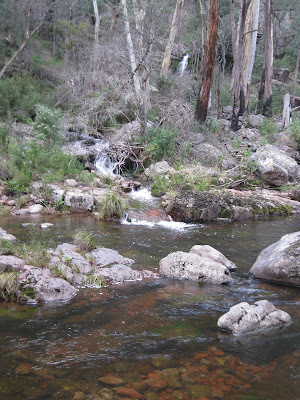 Kent Creek and the third falls 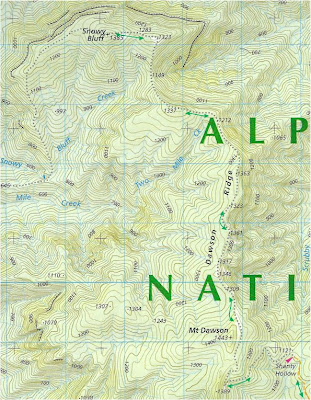 SVmaps, Shanty Hollow to Snowy Bluff plan was abandoned
We continued further downstream for about 100 metres and were delighted with the view of the fourth falls. 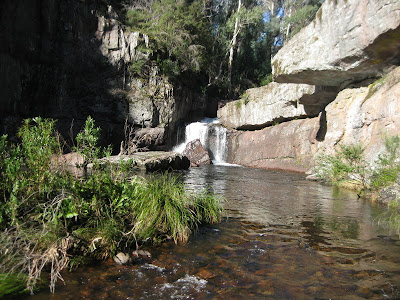 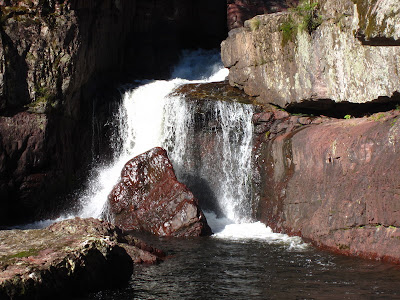 
There is a cliff at the bend and the river was high; so, Allan did not want to go on.  With care I walked over the cliff to get onto the other side of the river, explored a bit around there, then came back. 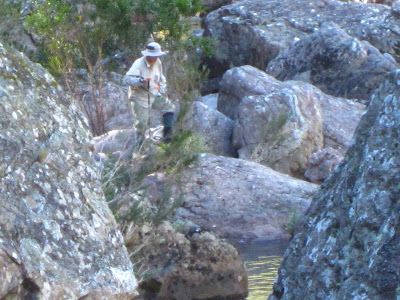 Gateway to the lower falls, the fifth and we missed it!

Here, we again met the two overnight walkers.  They had spent an overnight at Lummican Gully and took the low route in this morning.  Like us, they abandoned their plan to go to Dawson Plateau and Snowy Bluff. 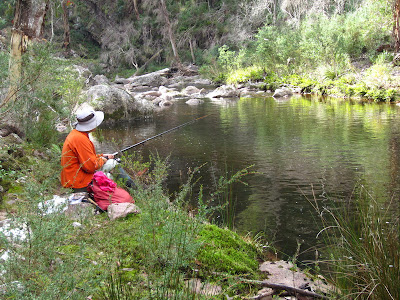 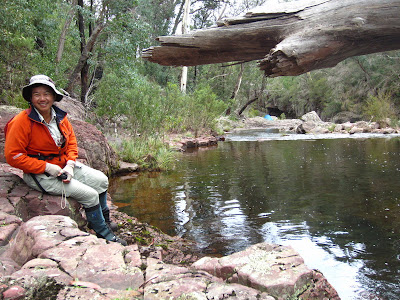 With the forecast of rain for the following afternoon, from a very poorly received radio station,  we arose early the next morning, trying to get past the steep and slippery section of the track before the change in the weather. 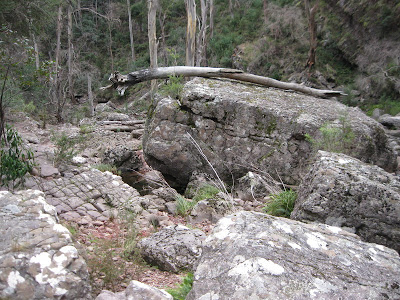 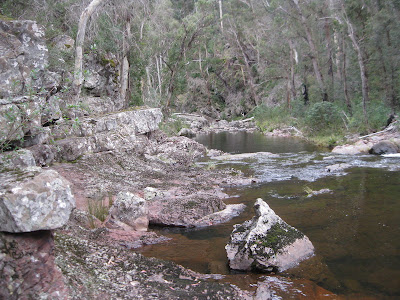 The forecast was right as we were in rain jackets

Light rain started to fall while we were having lunch on the steps near the first falls and it steadily increased during the afternoon and turned to sleet as we approached the waiting car at the campground.

As we drove home over the McFarlane Saddle, the sleet turned into snow providing a "winter wonderland" end to the trip 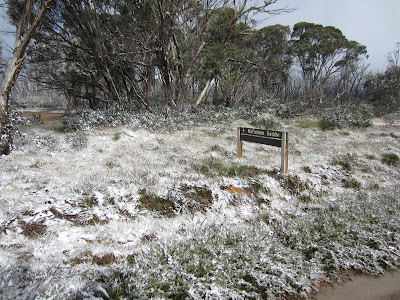 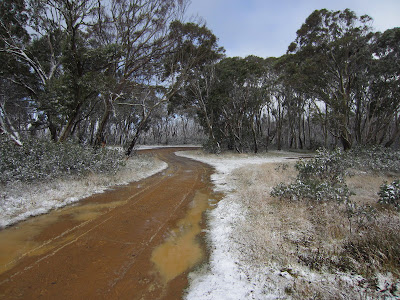