This walk began as a 3 day plan to climb from Breakfast Creek, on the Tamboritha Road, north of Licola, to the top of Mt Ligar (The Crinoline) and then to do a ridge-following loop to Mt Tamboritha, via Long Hill  and then back to Breakfast Creek.  The original plan was abandoned in the face of low water, difficult terrain and warm weather, to become a two night stay on the slopes of Mt Ligar. 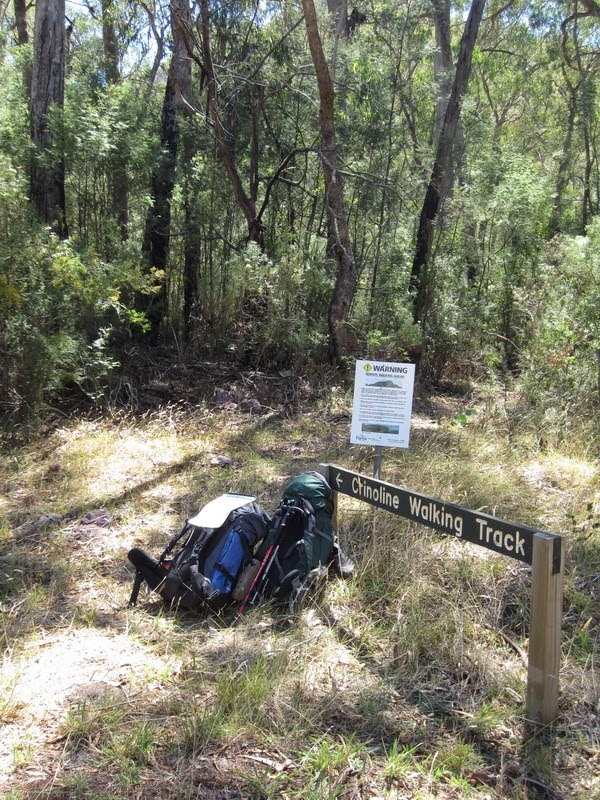 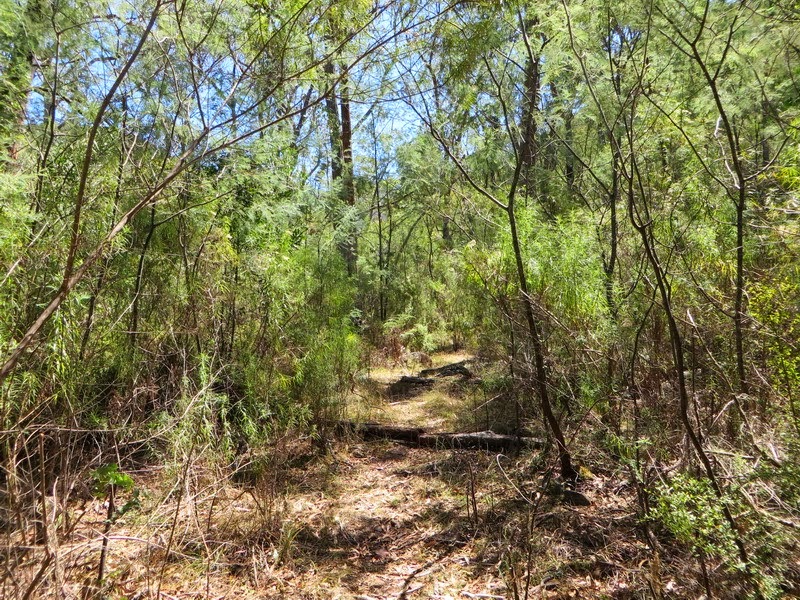 The signpost & a warning sign at the start on the Tamboritha Rd
Day 1 (22nd Feb 2014)
The climb to Mt Ligar begins at the signposted track on Tamboritha Rd, just before it crosses the Breakfast Creek and to the south of the Melbourne Grammar School camp.  This is at 37°31' S, 146°37' E (or H55 04 660 E 58 477 N in UTM Grid on WGS84 from memory-map Interactive Topo).  As well as the signpost, there is a “warning” sign, pointing out the hazards of the “remote area” and the fact that the climb involves an ascent of 800m (2500ft) to the peak of The Crinoline.
The older Crinoline Track leaves the Breakfast Creek camp site and goes north on the east side of Breakfast Creek and is reputed to be a killer climb, straight up the south-side spur of Castle Hill and then across a ridge to Mt Ligar.  This path “straight to the top” is now deprecated, and the Macmillan Walking Track is preferred.
The Macmillan Walking Track starts with easy ups and downs, going NNW along the Breakfast Creek and then west along the north side of an east-west running tributary of the Breakfast Creek.  This uses westerly-travelling, 1 in 10 zig-zags to ascend steadily from the 330m at the start to 830m at the end of this section. 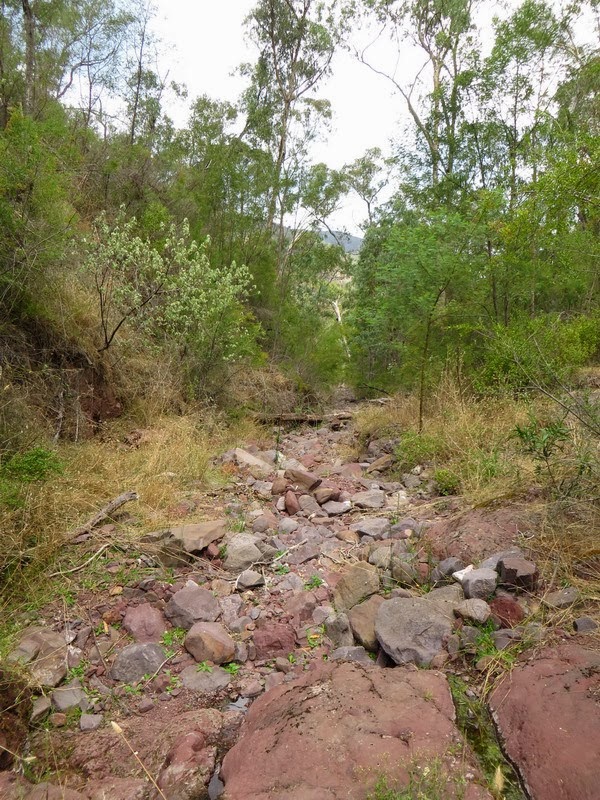 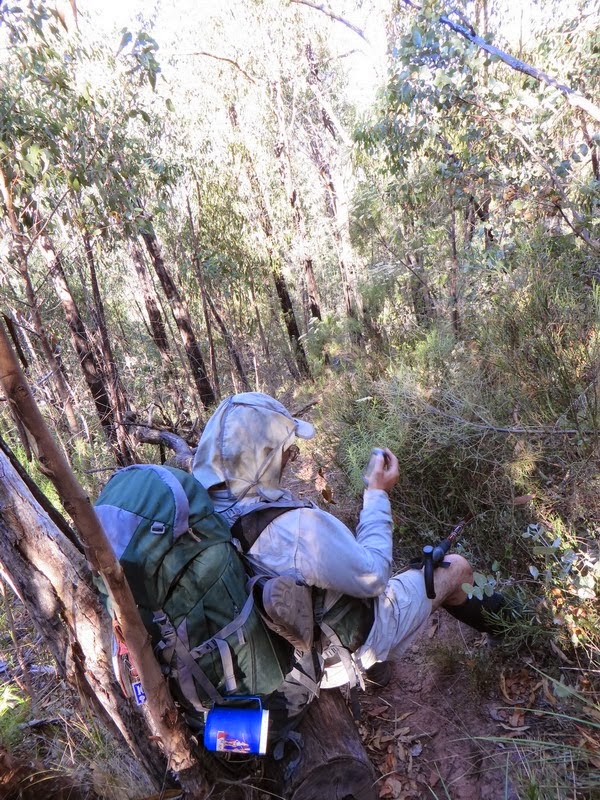 The track then heads north again and rises steeply to about 900m elevation.  From here, the track diverts north from the Macmillan Walking Track, past a “Smith St”sign, a campsite (the first official site) and a rain-water barrel (as talking to others at the roadside camp though, the consensus was that there was no water at the top).  The barrel is at H55 04 641 E  58 492 N and it did have some rather murky green water in it.  Not very healthy-looking, so we decided to locate better water first.  The best possibility for water appeared to be a creek and waterfall to the east of the “official” camp-sites, south of Long Hill and north of Mt Ligar. 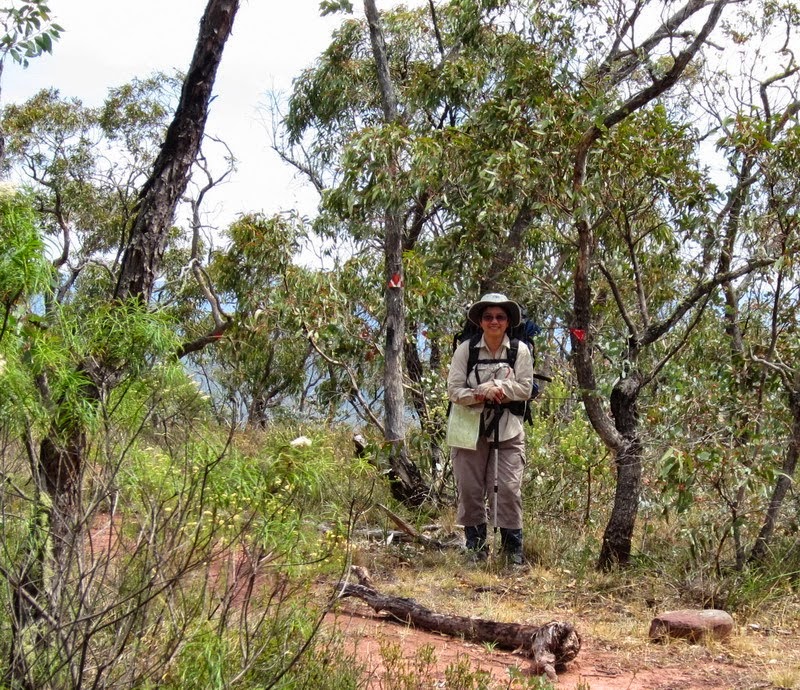 The track then climbs another 150m, with yet more zig-zags, up the side of a spur, through rocky outcrops, open fields and light bush, to a height of 1050m at the end of the southern spur of Mt Crinoline.  This part of the track gives great views of Mt. Sugarloaf. 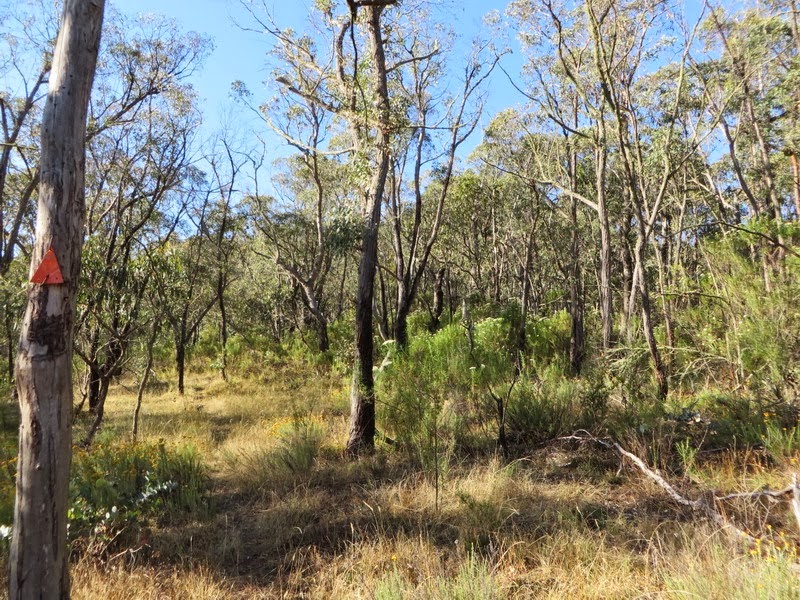 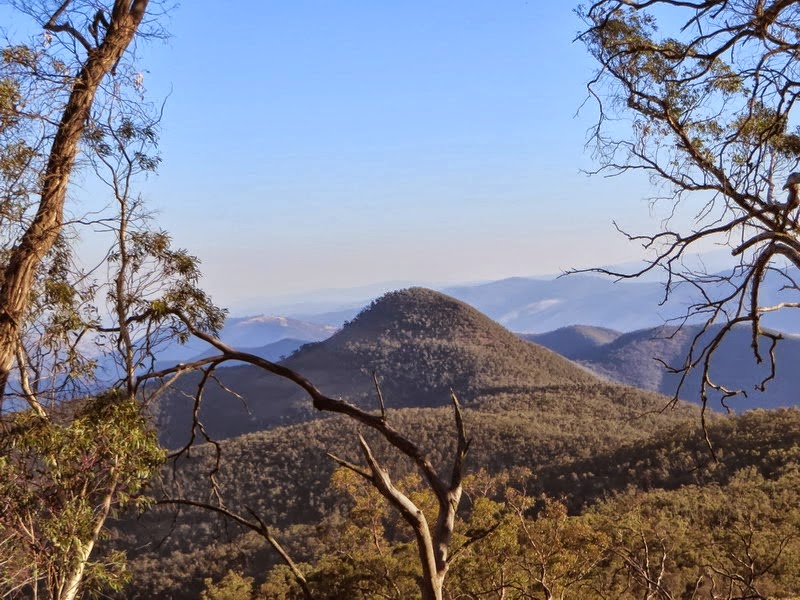 Good view of Mt Sugaloaf to the south

As we had started at 12.30pm, it was getting late by the time we got to the top of this spur and so we cleared a campsite in the middle of the track and settled in for the night. 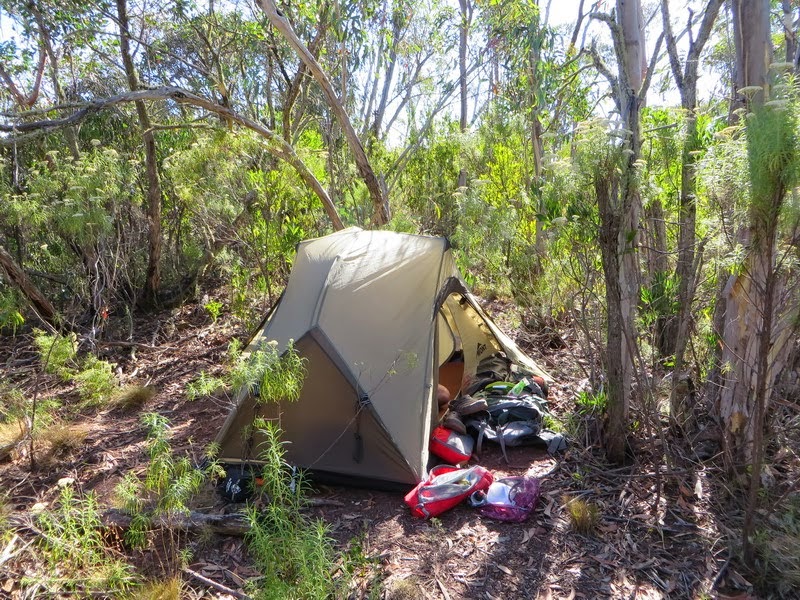 Camping on the main spur to Mt Ligar

The track continued along from our campsite, along a narrow and rocky ridge, with lots of rock-hopping, and climbing for about 15minutes to get to an "official" campsite at the south-side of The Crinoline (the 2nd official campsite). 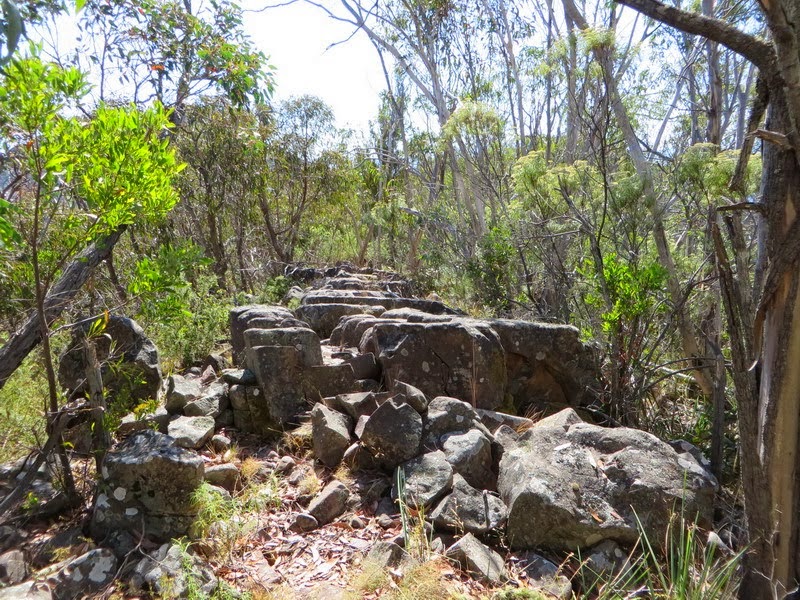 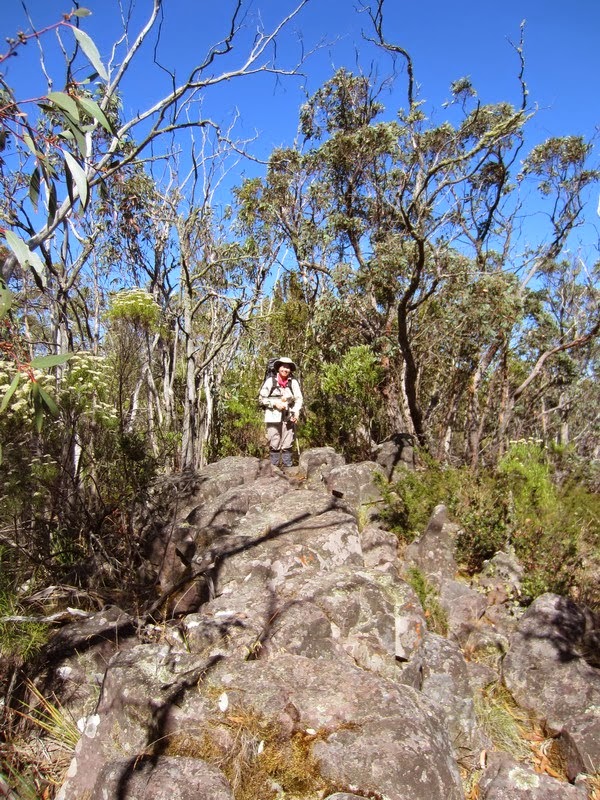 Rock-hopping on the narrow & rocky ridge 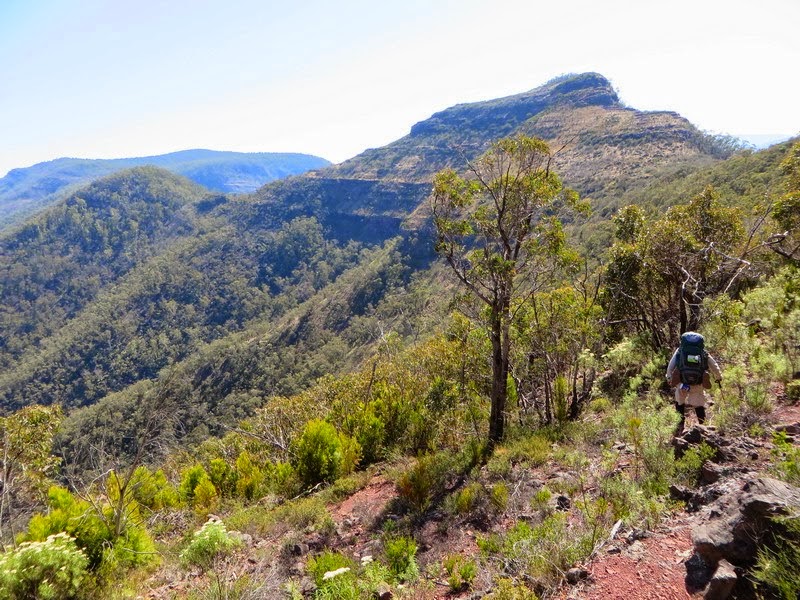 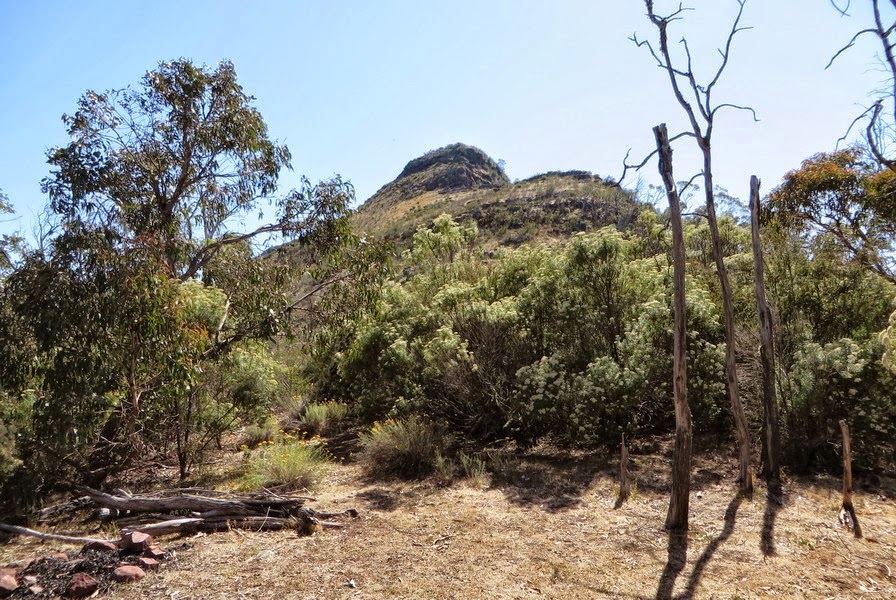 The plan to camp here had been missed!

We continued on the foot-pad north (when we could find it), that traversed the west side of The Crinoline, following one of the edges of the rock cliffs that give The Crinoline its unique appearance.  It is important to plan ahead here, to pick a contour line across these cliffs so that you don’t get trapped by a cliff-face or a steep creek gully.  There is no clear, single track here, but there are lots of similar pads across the west-side cliffs of The Crinoline, that all achieve approximately the same outcome of a path to the north spur. 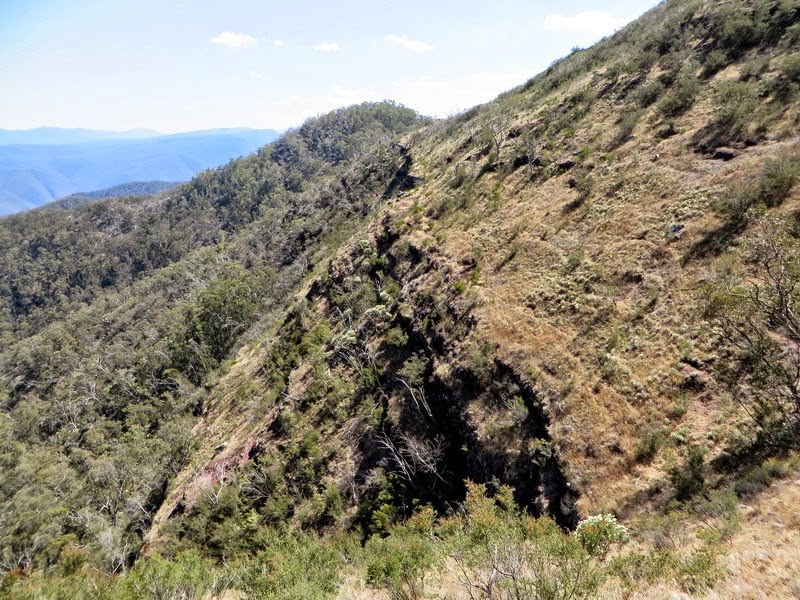 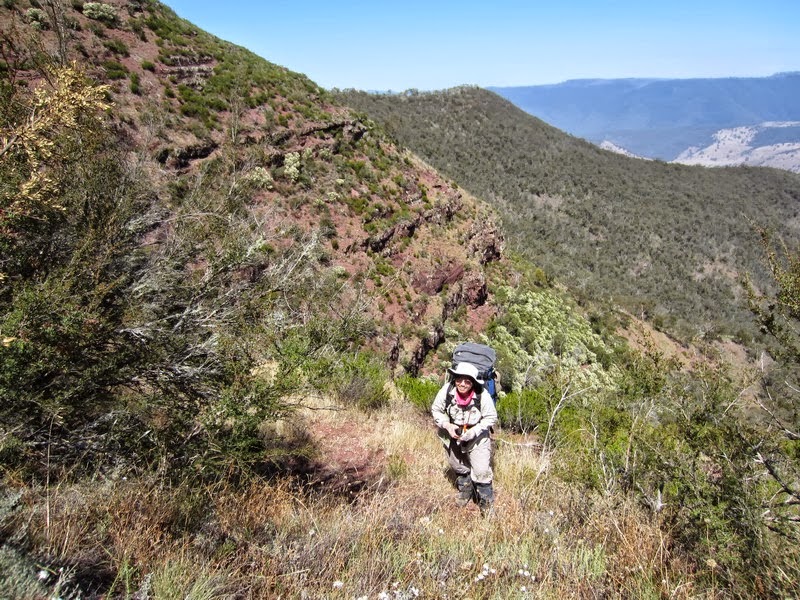 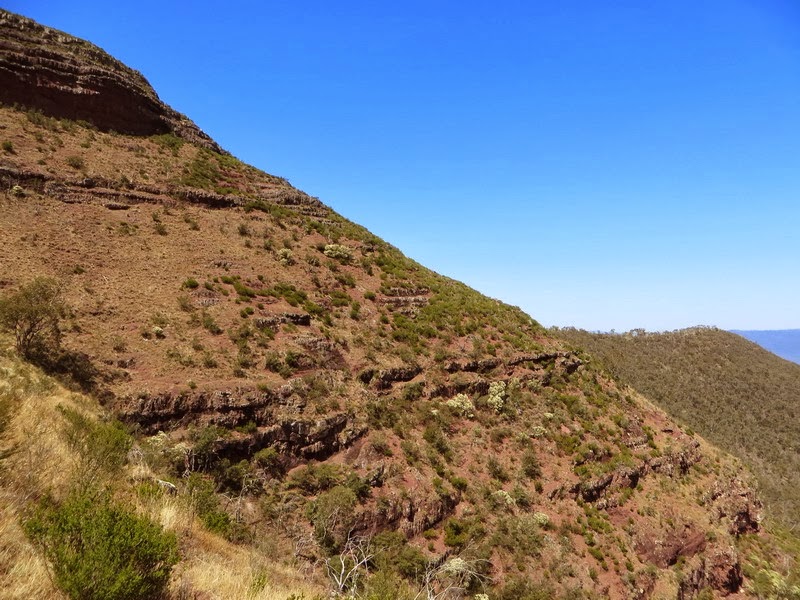 By the time we reached the north-end spur of the Crinoline, the weather was getting warm and the terrain was getting very rocky, so we decided to ditch the full packs at the unofficial campsite, at the base of the northern spur and proceed to the “official” campsite on the south-side of Long Hill, with day-packs only, loaded with water bottles.

The pad north from here is rocky and undulates about 20-50m vertically.  The best plan is to just keep to the ridge and the pad, when you can find it.  Cairns sometimes help to find the best way through. It is navigable but not for the beginner. 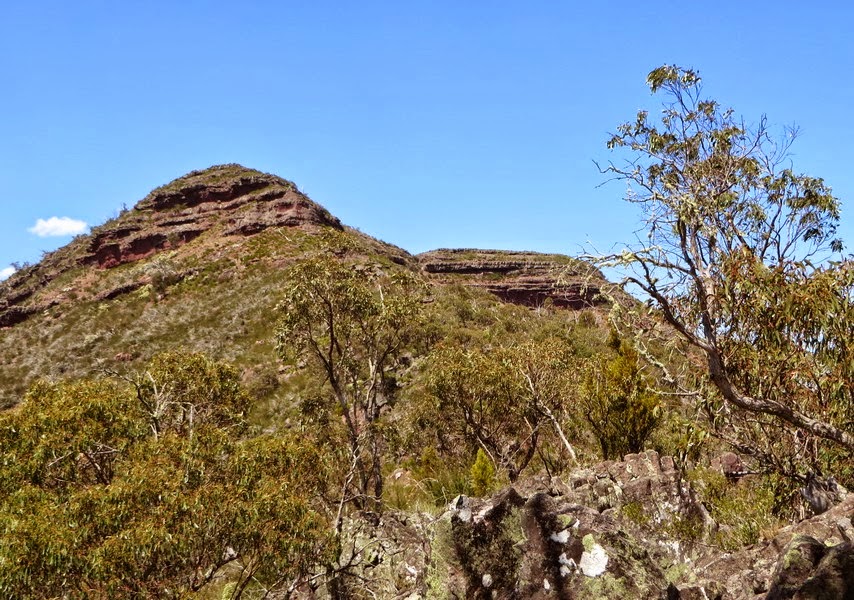 The Crinoline from Long Hill 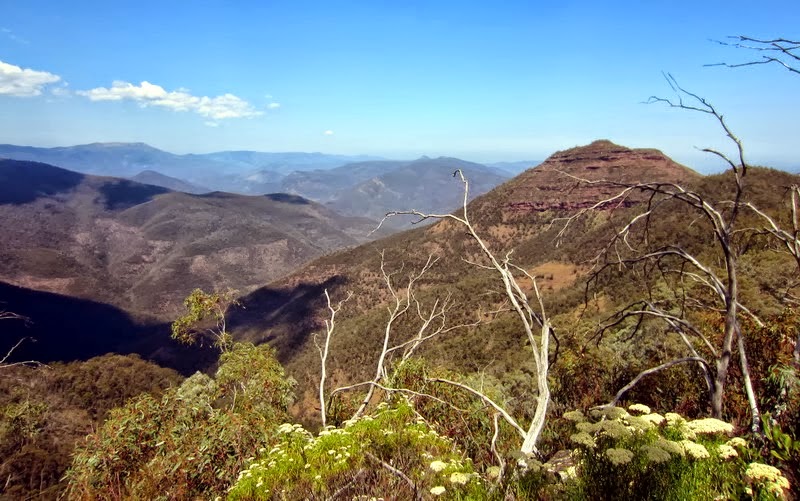 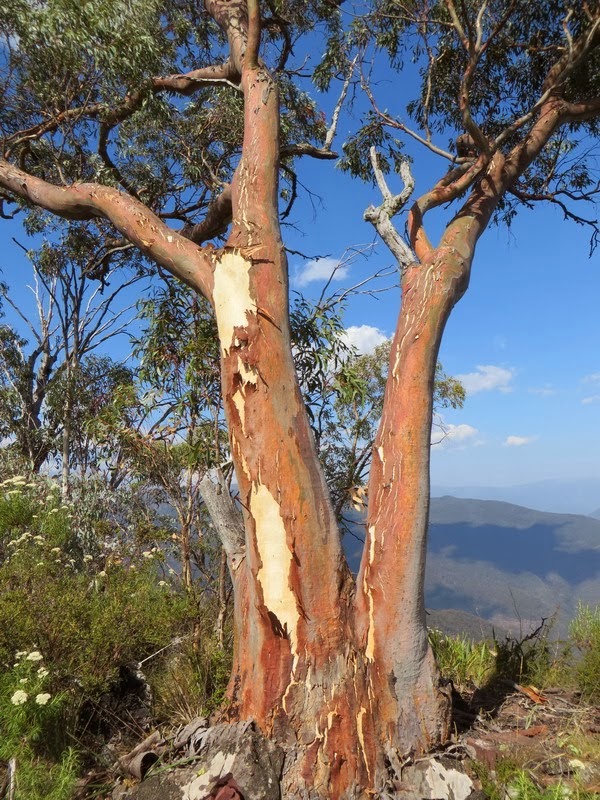 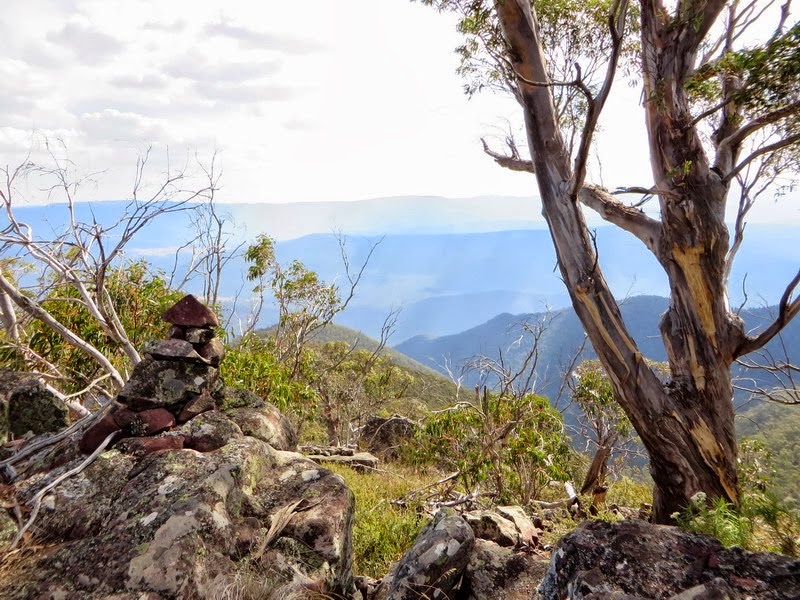 Colourful snowgums (L).  The lookout near the LHC campsite 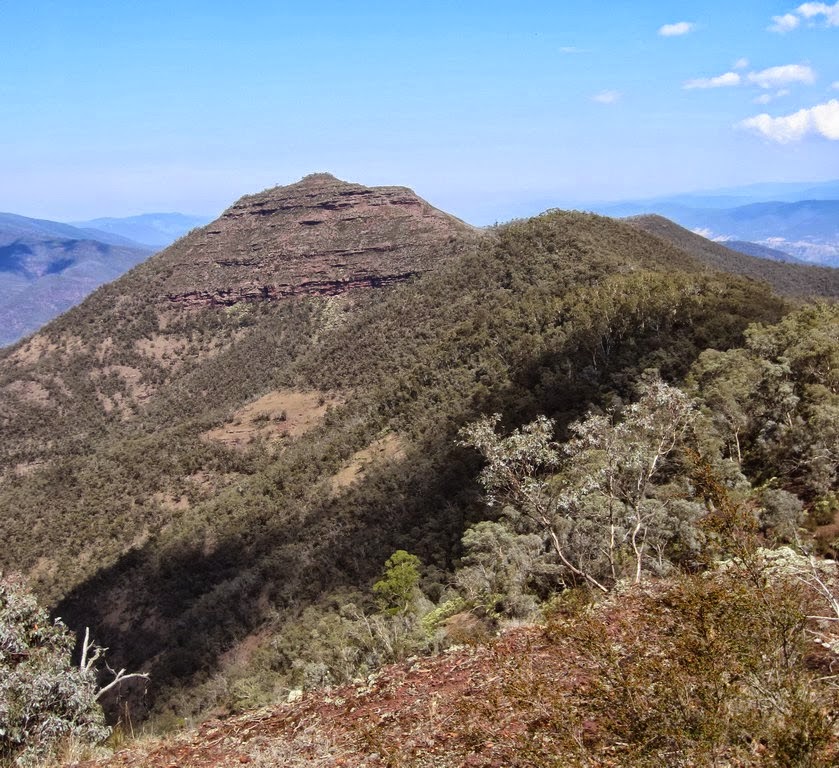 The Crinoline from the lookout (left).  The "official" LHC campsite

When the “official” camps-sites were reached, we headed east, down an indistinct pad to the waterfall supply creek and, hopefully, water.

No such luck!  The waterfall head creek was “as dry as.”  An exploratory dig into the creek-bed, down about 15 centimetres and a short wander up and down the creek-bed, showed no sign of increasing moisture either. 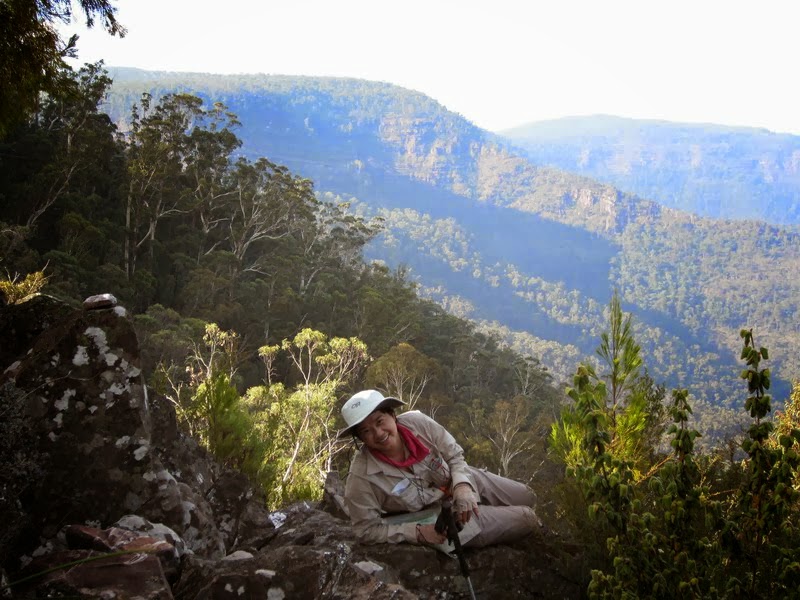 Back with empty water bottles!

There was nothing for it but to go back to our packs at the north of The Crinoline and have a rather “dry” night at that site using the remaining water we had hauled up the mountain. 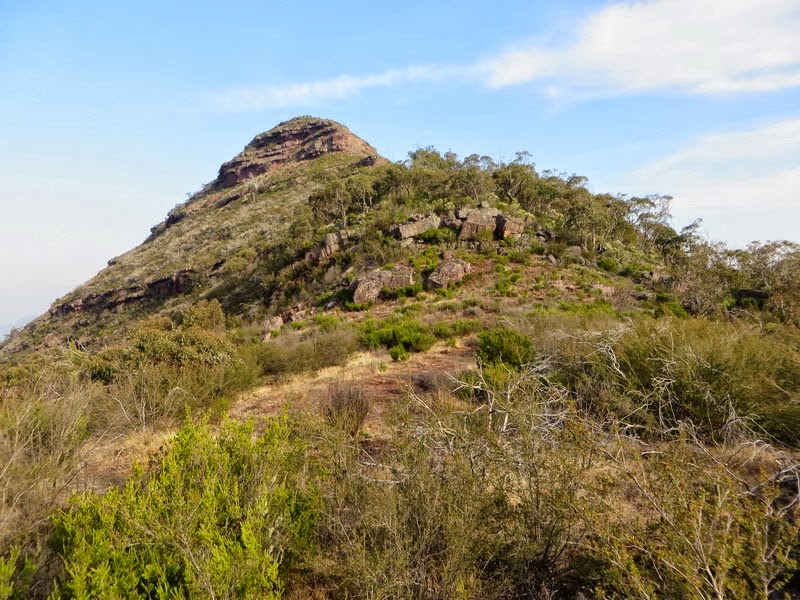 Evening views of Mt Ligar from the unofficial north-sude camp

Sunset over the Goulbourn & Macallister SFs 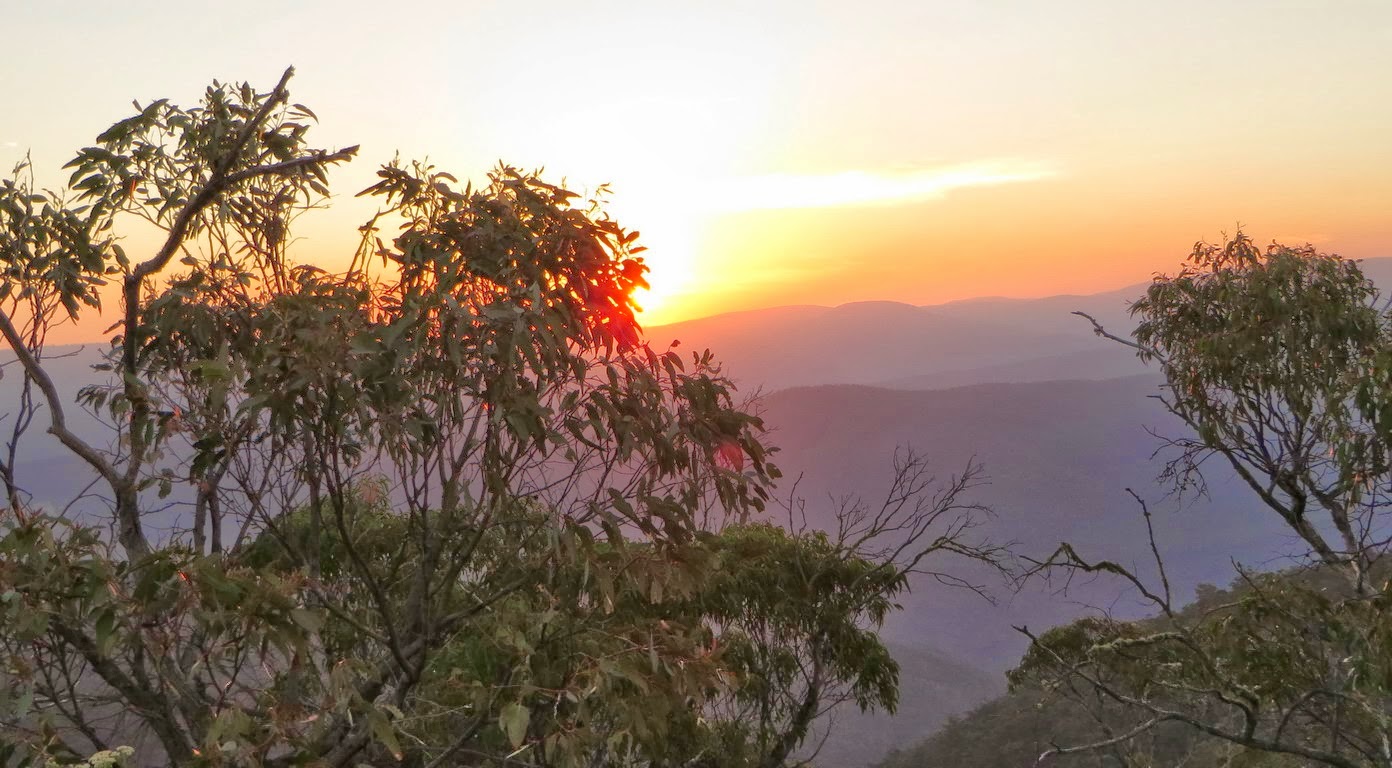 At dawn, we de-camped at about 0730 and retraced our steps (sort-of) back to the Crinoline south-side camp, in the cool morning air and the shade of Mt Ligar, aiming for the now, very attractive, rain-water barrel. 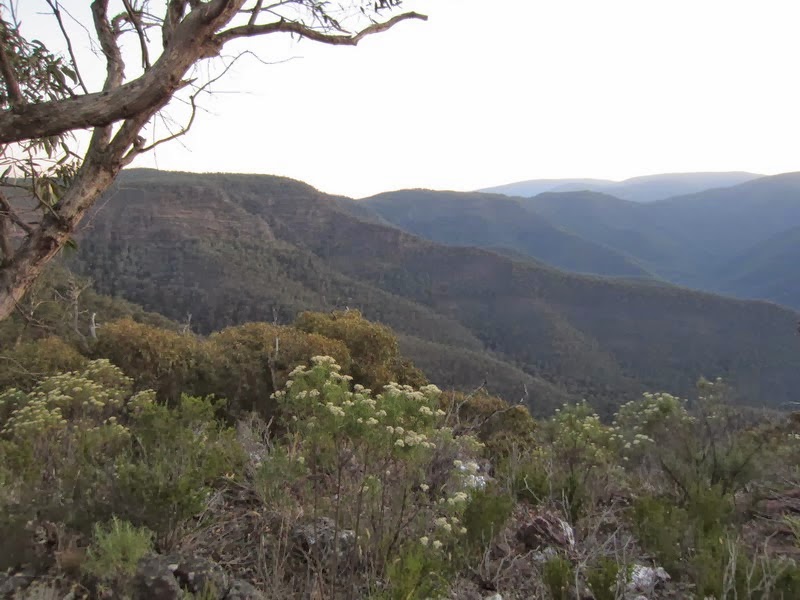 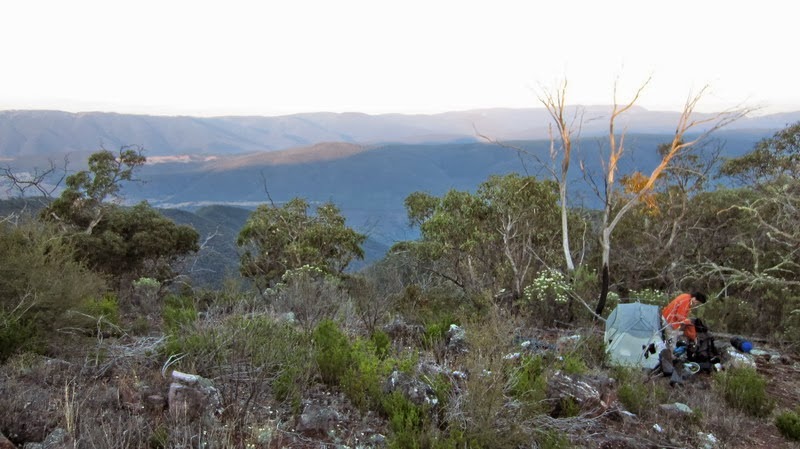 Early packing to catch up with a change in weather conditions 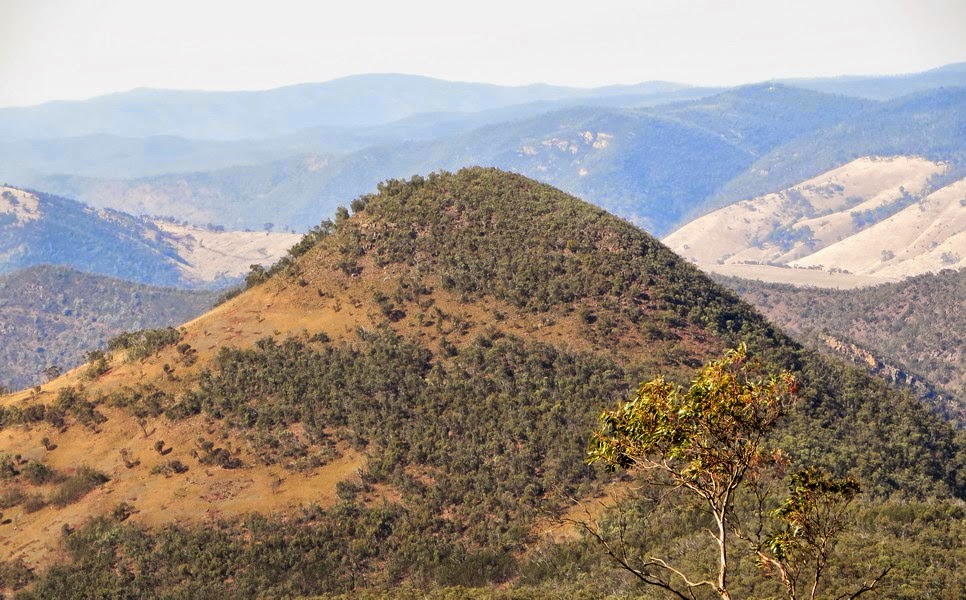 The Sugarloaf from the zig-zag descent


When we got to the first south-side camp at 1115, we rigged up a water scoop from our safety rope and a drinking mug, to get the water out of the bottom of the metre high, 200 litre barrel.  This retrieved the rather greenish rainwater in 100ml scoops.  This was then sterilized by either boiling or steri-tabs, to give us a fluid breakfast-lunch of soups, bread and coffee, to gradually rehydrate us.

Thank-you so much to the park keepers for having the foresight to place this barrel where it is.  If it had not been there, then the walk would have to have been aborted on the second day, for safety.  Hopefully the water we took was replaced by the rain that fell later that day. 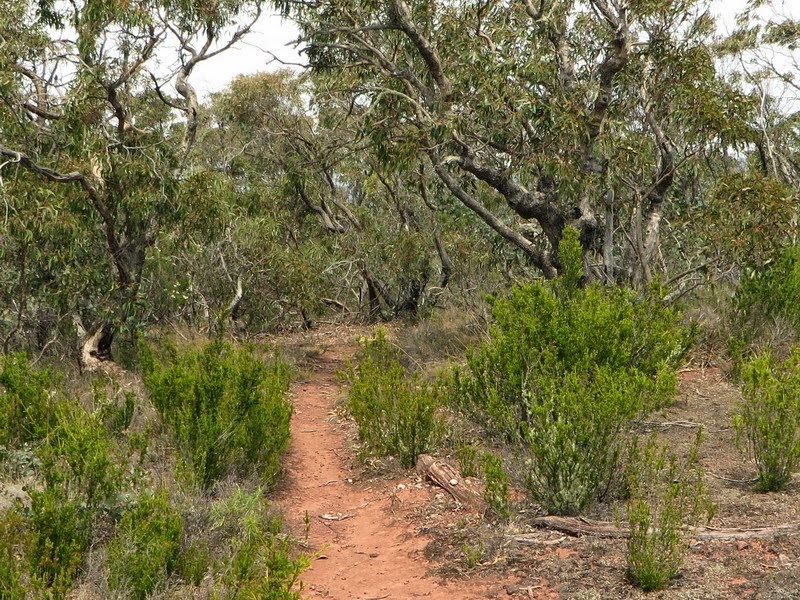 Back track down and down ..


Once we had replenished our lost water, at about 1250 we started to retrace our path down the hill.  We knew from the weather forecast that it would get stormy after 1430 so we made sure that the bulk of the descent was completed before it clouded over.  We reached the Tamboritha Road where the car was parked, at 1530, and headed for a good wash at a nearby water-hole, on the Tamboritha Road.  As we prepared to wash, the heavens opened, so we had a refreshing shower and bath combination, before commencing the long journey back to Melbourne. 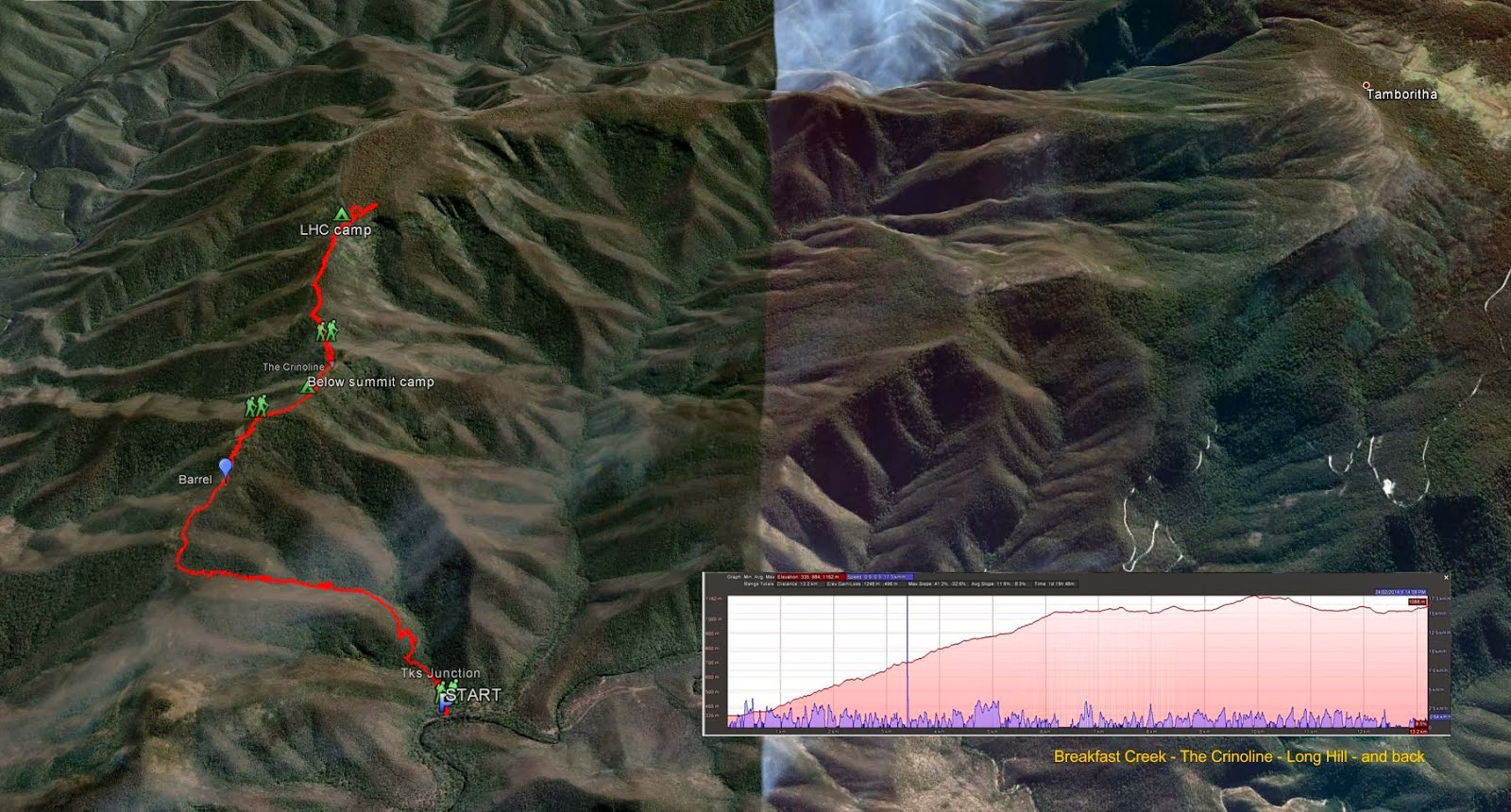 The Crinoline ascent alone is a tough climb for a sixty year old in warm weather, with a full three day pack and lots of water.  (6 kms horizontal and 800m vertical). Our original “plan” of 30 kms horizontal and 3000m vertical walking was way too ambitious for 3 days and even more unrealistic, because water is so scarce up there, at present.

I would suggest that other hikers are not too optimistic about their capabilities in this area, even if they have alternative plans.  The rough rule of thumb that says to plan to walk only 8-12 km per day of full pack carrying and count every 100m climbed or descended as an extra kilometre walked.  This rule works well for for older people of average ability.  Fit youngsters and other super-persons may be able to do more, but their performance should not be used as a planning benchmark.

There are little or no significant sources of fresh stream water in the Victorian Alps at present (Mar-2014). This may change if we have good rains this winter.  Currently, you must carry all the water you are going to need for any journey into the Victorian Alps, unless you are absolutely sure that there is a dam, tank, spring or known perennial stream that can refurbish your water supply along the way.

Adequate water supply is going to add 2 kg per day to your backpack weight (plus 700gm for food) so it puts a very real limit on just how far you can walk into the Victorian wilderness, without significant risk to life and health.

1.5 litres of water per day is really not enough, for safety, at the end of summer in Victoria.  You really do need 2 litres per day to remain healthily hydrated, especially if pushing the climbing or distance limits, as well.  Make sure you do the math before you leave to ensure the walk meets all safety criteria and your abilities and always have a “Plan B” and an escape “Plan C” ready to go, at any time that adversity thwarts your primary plan.

I am a 60 year old male, born in Rugby, Warwickshire, England, and emigrated to Australia as the son of a “ten pound pom” in 1963.    I trained as an Electronics Engineer at Melbourne University and specialized in communications and then worked with the Philips/Simoco/Comgroup organisation in Melbourne, designing two way radios and the associated support systems for taxis, trucks fire, police and ambulances, before the advent of the now-ubiquitous mobile phones and wireless internet.  My amateur callsign is VK3ZON although have not been active for some years

My later career involved digital radio design (P25 and DMR).  So I was a sort of Jack-of-all-Trades in computer control, radio hardware, audio and radio signal processing, and radio system design.   I am now retired.

I have been bushwalking on and off since I was in the scouts in the late 60s and I started camping and caravanning in the late 50s (at age 6).  I am also able to cross country and downhill ski on intermediate terrain.  I have had photography as a hobby from box-brownies to megapixel sensors and from MQ developer to Photoshop.  I also know enough about GPS, surveying and navigation to get me into trouble.

I plan on doing some local travelling, photography and walking in my retirement, before the old body gives up, as well as indulging my many other hobbies.

I have known Dzung for about 10 years now, first assisting with her computer and photography problems and then later, joining her for some of her less challenging walks. Hopefully, we can continue sharing walks, hobbies and knowledge for some time to come. 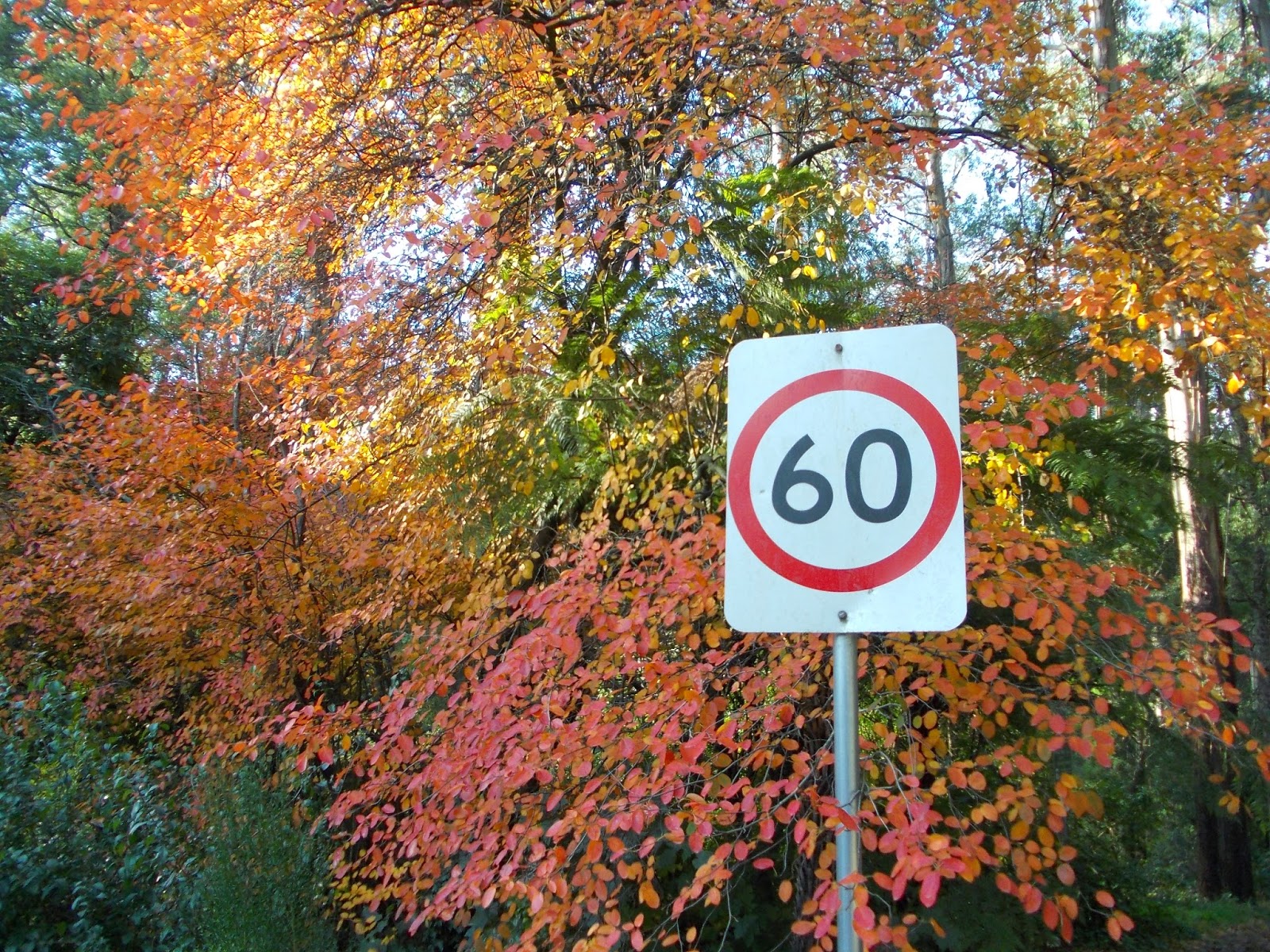