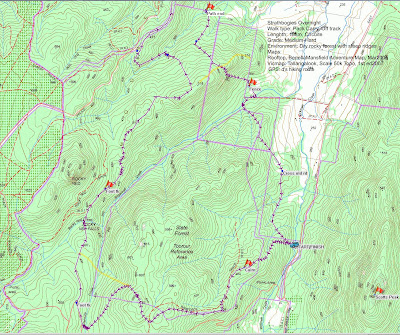 I had been solo to Strathbogies twice.  Once had been up and along the spur of the eastern range.  The other had been a return to retrieve my fit-over glasses, which had been left behind at a lunch spot near Scott’s Peak on the range.

It was a rather long drive from Melbourne’s southeast and it took about 3 hrs to get to James Camping Ground with facilities including: toilets, tables, fire rings and creek water, which needs to be treated before drinking.

In the morning, I enjoyed the company of two blue-wrents while doing the packing.  There was no walking track signpost at the campground and there had been no information available on ParksVic website.  With an internet search, I found one or two written reports of an overnight walk in the area, but an appropriate route map is still not yet available.  Hence, this was mainly an exploratory trip with the plan of a clockwise direction to tackle the western range, to take in a north-eastern ridge, and then to pick up my own way back via around the base of the range or out to Lima East Road.  It was about midday when I got ready, so extra food and cooking water for the night and the next morning were also packed.  One usual final step before shouldering my pack was to take a GPS waypoint of the starting point, which would be useful for the return trip.

The walk started with a crossing of Moonee Creek (Charlie Crk, Campground section), which was just ankle-deep.  The bank on the other side of the creek was rather scrubby with blackberries.  This reminded me of the garden gloves, which were left at home.  Long pants, gaiters were in great help. 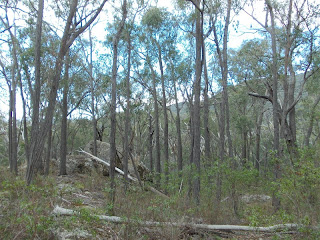 I then made my own way up a ridge, heading west, then southwest until I reached a pole at 440m elevation.  A bit further was a cairn (464m), which was built on the open rocky slabs, which provided views of Scott’s Peak on the eastern range and the mountain range to the south.  This 190m zigzag climb reminded me of a tiger snake I had encountered on one of the two previous walks in the area. 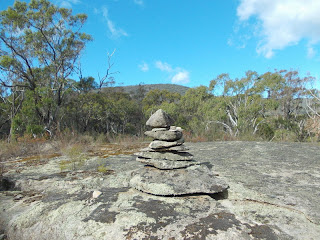 View of Scott's Peak on the eastern range 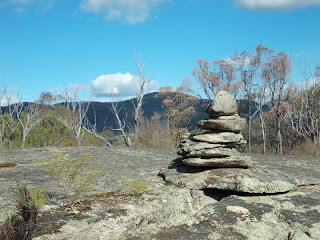 Following the open slabs for a short distance led me to a faint path.  Continuing on  the path, I arrived at a rocky outcrop (504m), where I had late lunch (about 3.00pmish) with the view down a slope full of fern trees.

After lunch, about 1km of walking up and along the path took me to the Bamford Track, which was an old vehicle track.  Crossing the track, I headed up a ridge towards White Rock.  The terrain up here was rough and scrubby and it was getting rather late.  Hence, on arriving at a saddle (about 600m), I started looking for a camping spot.  Unlike the noise of loud music at the campground the night before, it was so beautifully quiet up here.  The night was rather windy and I tossed and turned a bit 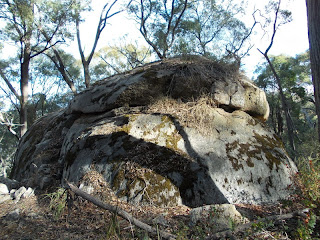 One of many giant boulders in Strathbogies 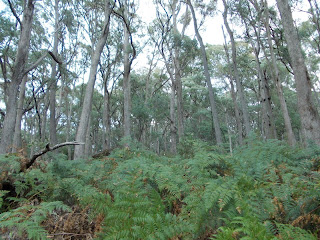 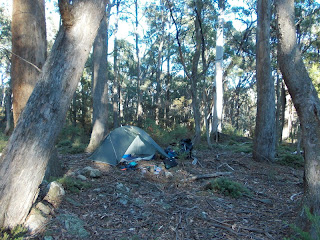 Camping in the forest


In the morning, I abandoned a side trip to White Rock.  The initial plan heading northwest to reach Rocky Ned Falls was also changed due to the condition of the terrain, which was rough, scrubby and steep.  Instead, I headed west.  The closer I got to the bank of Parlour Creek, the thicker the scrub became.  Excellent creek water was so inviting and my wine flask was also refilled before the climb. 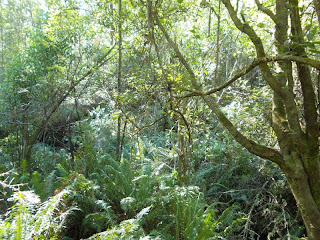 
The other side of the creek was also scrubby, but it was only a 21m climb up to reach Lima East Road.  I kept to the right and continued for about 32m along the road until I reached an unmarked junction, where there was a car and the track to the right was the one, which led to Rocky Ned Falls.  Please note: this track is shown on Rooftop's Map, but not on VicMap. 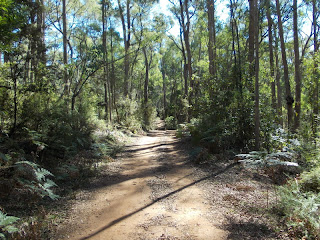 Following this wide track for about 350m, I met a young lady who was on the way back to her car.  Continuing another 100m, I noticed the spot where the lady camped last night.  It seemed that the original plan had been reasonable and I missed out the dropping down from the spur into Parlour Creek Valley.  Lunch stop was at Rocky Ned “Waterfall”, where I could hear bikies approaching, greeting me, then quickly disappearing. 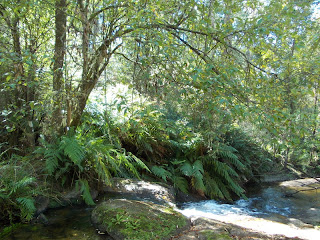 
After lunch, I crossed Rocky Ned Creek, and headed up for about 21m to arrive at an unmarked junction.  Leaving the main track, I followed a foot (& bike) track heading north down to a saddle, which provided the less challenging access to Rocky Ned to the southwest and an opportunity to explore few giant boulders on a ridge line in the northeast, where I stopped for a drink and a check out of the location.  Due to steepness and scrubby condition of the terrain ahead, I changed the direction by leaving the ridge line and following a foot (& bike) trail, which led to the northwest, then down to a creek, where I decided to call it the day.  It had been a bit of a long day, coupled with the lack of sleep the night before, so after a quick dinner I hit the sack. 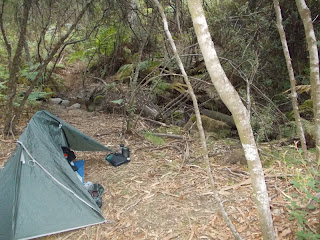 The next morning, I crossed the creek and followed the wide foot track about 3.5km northeast up until reaching Police Road.  After an immediate turn to the right, I followed Herbert Drive, went past a private property, and continued on until the end of the track, where I spotted a “black belly” snake with its head and two third of its body dug under the ground.  It had been hunting or heard me arriving?  Crossing an unknown creek, I arrived at an open rocky slab. 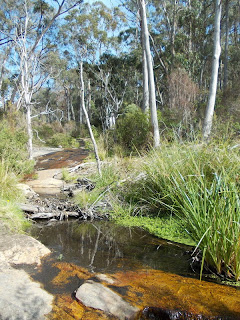 Back to the forest 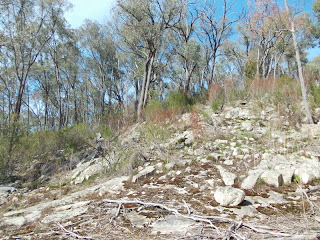 and then head for the hills again


From here, the walk back to James Campground was mainly off track.  I headed up a ridge and up another ridge, then descended a 200m steep slope to reach the boundary.  Walking along the fence line for a short distance, I arrived at Sugarloaf Creek, and then a waterfall. 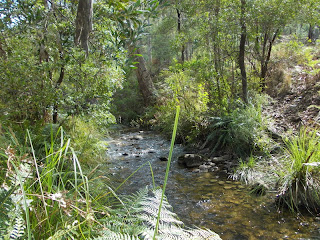 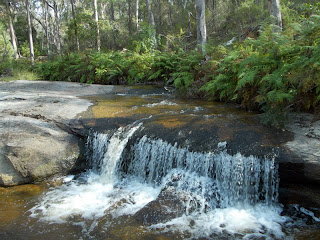 Leaving the waterfall, I picked up my way, followed a path, then arrived at a private property, where I met a nice land owner, who was working on the paddock.  He wondered how I ended up there and congratulated me “glad that I made it”.  Hence, one more ridge and one more gully would take me back to the starting point. Following the paddock track for about 0,5km by the compass bearing, I reached the boundary/fence line with a pole, which was built into a big boulder.  A steep and scrubby bush-bash down saw me back to the creek I had crossed two days ago.

All in all, I was rather satisfied with the exploring.  Another return to this area with a bit of change in the route would be much more enjoyable. 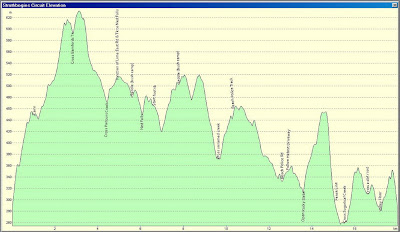