I felt rather unfit because I have not done any pack-carrying walks for a while.  This was a warm-up walk for future longer walks planned for Tasmania early next year.  Lake Tali-Karng is located in the Avon Wilderness area of Victoria and north of Licola.

The best time to hike is between November and April and this area has excellent alpine wild flowers in mid-to-late Spring.

Licola is approximately 4 hours drive from Melbourne through Traralgon and the start at McFarlane Saddle on the Moroka Rd is about a further 30 minutes from Licola (last petrol service).

The facilities at the McFarlane Saddle campsite include only a long drop loo and cleared campsites of varying sizes.

Park Victoria website suggests that you camp at Nyimba Camp and do a day trip to Lake Tali-Karng rather than camping on the shore of the lake.  This makes the descent to and ascent from the lake much easier as the access is very steep.  Also, the traditional owners of the lake prefer that people do not camp there and that visitors minimise their damage to a sensitive and sacret environment.

The walk from McFarlane’s Saddle to Nyimba Camp and Riggall Old Hut site across the Wellington Plain is approx 9km on a gentle gradient and it takes around three and a half hours including a long break for lunch.  The terrain is mostly alpine plain with occasional clumps of snowgums.  The larger snowgums are dead from the recent bush fire leaving only scrubby regrowth. 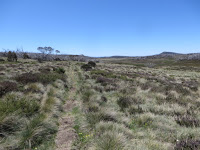 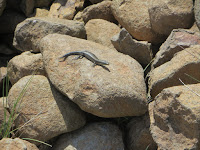 Wellington Plain
The Nyimba Camp has a lot of campsites and a long drop loo with a 600 litres rain water tank and a flowing stream. 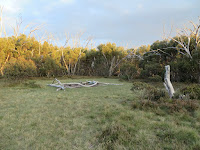 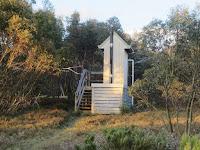 Nyimba Camp
There are 2 possible routes to the lake from Nyimba Camp.  Gillio’s foot track is about 4.5km and steep with multiple zig-zags to help the walker down the steeper parts of the walk.  The easy-graded Riggall Spur and Echo Point Tracks are a little longer, but less steep. 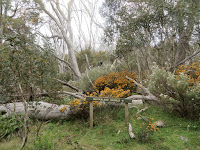 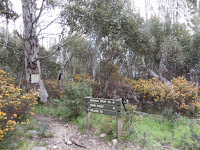 Routes to the lake
We took the Riggall Spur and Echo Point Tracks to walk down to the lake and Gillio’s Track back climbing almost 600m (take about 3 hrs), but, in retrospect, it would have been better to have taken the other direction.

There are several campsites and beaches on the western lakeside.  Tali Karng is a fuel stove area and no fires are permitted within 1km from the lake.  There are no toilet facilities at the lake.  The southern shore offers access to the Snowden Falls at the eastern end of the lake, if the lake’s water level is low enough. 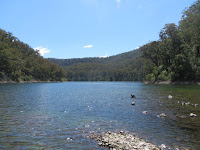 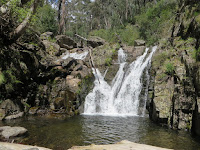 Looking east (L) and the Snowden Falls (R)
The scramble along the rocky shoreline to the falls is worth the trouble to see a very spectacular medium size waterfall.  YouTube clip of the Snowden Falls 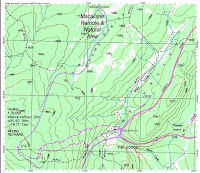 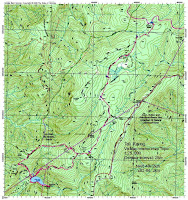 There is a short half day walk from Howitt Road to the top of Mt Reynard with a height of 1710m.  The shortest access route to the summit is across a small wooden foot bridge with a clearly visible from the Howitt road shortly after passing the Kelly Lane turn-off while heading north.

After crossing the bridge, you proceed due west climbing up a grassy slope and then bush bashing through medium height scrub to the top of Mt Reynard. 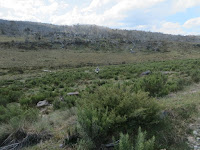 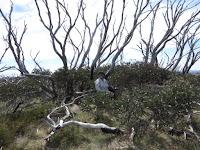 The foot bridge (L) and Mt Reynard top (R)
The summit is found by walking to the highest point.  There is no view at the top; but there are good views of the valley on the way up.
Posted by dzung nguyen
Labels: alpine area, bush camping, foot paths, wildflowers
Newer Post Older Post Home