We arrived at King Hut via Circuit Road, Howqua Gap and Speculation Road on the day before the walk.  The last 2 km of Speculation Rd was a bit rough in a 4WD.  The grassy and sheltered campsite located east of King Hut was occupied.  There were few other campers on the other side of the river, which was narrow and crossable on foot or in 4WD.  Our tent was pitched on a large grassy area, which was located between the hut and the toilet.  Our neighbours were quiet and friendly.  In the late evening, we were invited to join them sharing the warmth at the fire place in the hut, but we did not, because we planned an early night and an early rise.  Just before it got dark (about 8.20 pm), a few more 4WDs arrived. 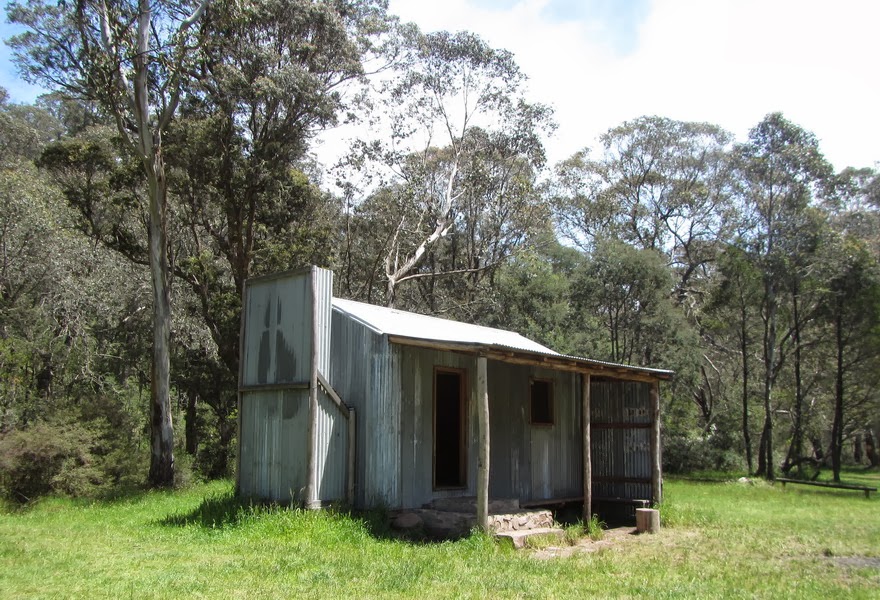 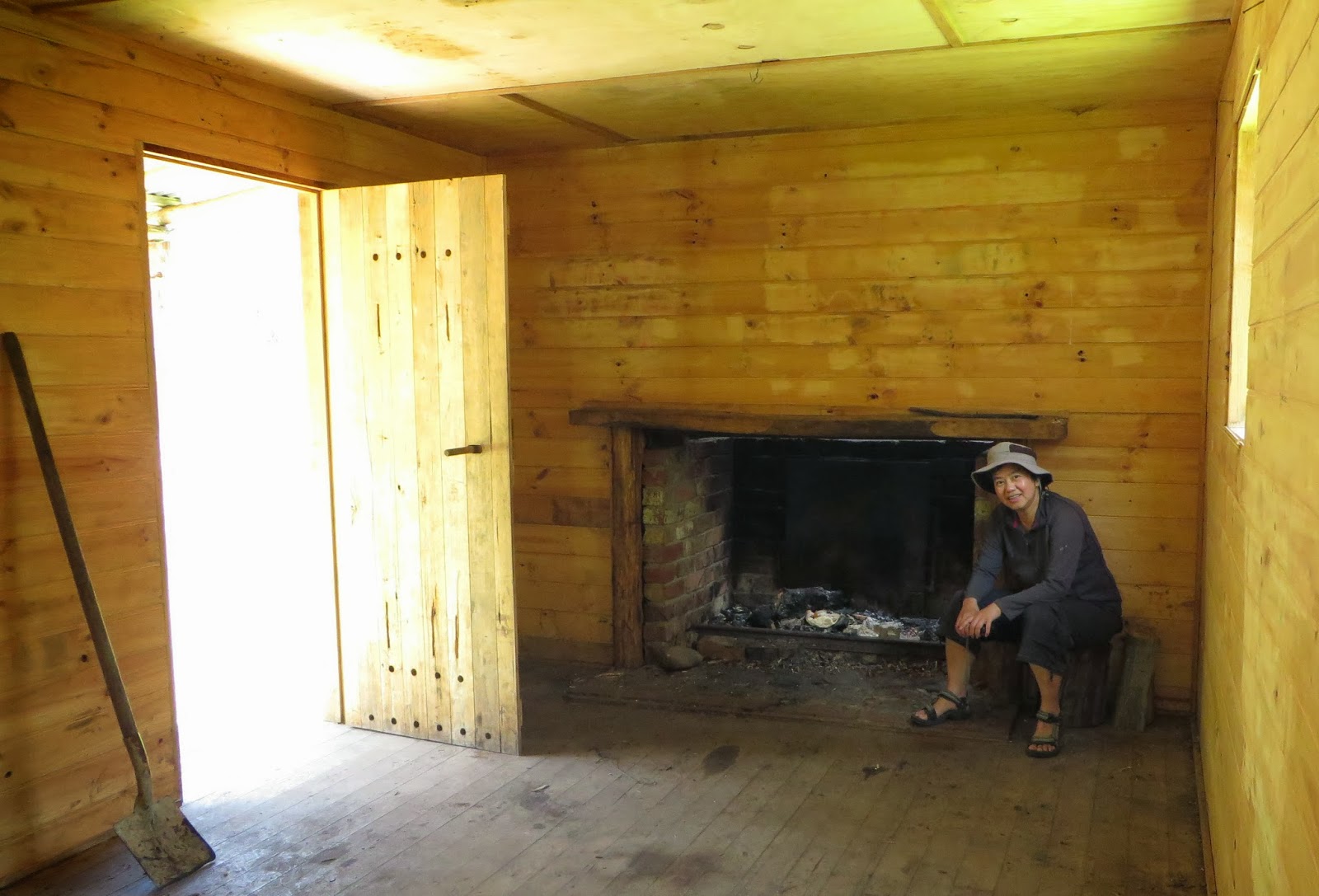 In the morning, we were awoken by a loud noise.  Someone was trying to chop firewood.  After having breakfast and the packing for a 3-day loop walk plan including King Spur (Mt.koonika), The Crosscut Saw (Mt Speculation) and Stanley's Name Spur (Mt Thorn), we drove to the start of our walk, which was located at the junction of Speculation and Basin Roads, about 800 m away.

There was no proper marker or sign at the start, which was immediately after crossing the creek or over the bridge.  I would suggest that you take your time here to find the proper pad into the forest, that would save your time and climbing due to the heavy scrub.  We picked up the pad on our way back.  Perhaps, we were not only those, who missed the actual start.

The start was rather steep and scrubby and we zig-zagged to the southwest about 500m up to the hill, rather than going due south as suggested by the guidebook. 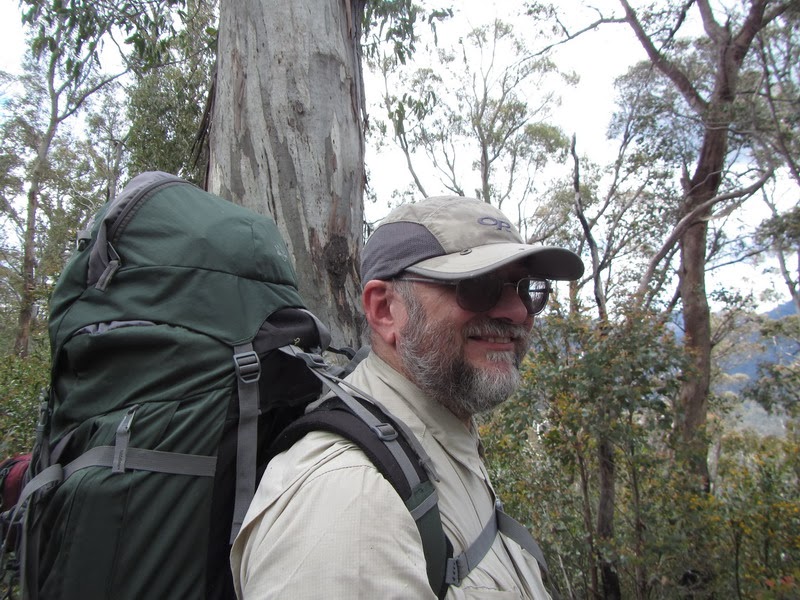 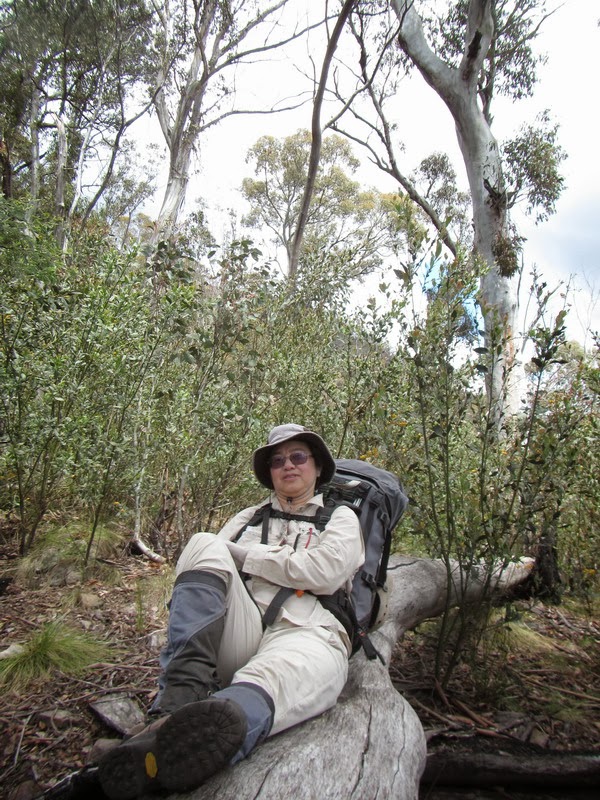 The need for a rest

For the next 2 km, we followed a faint pad climbing gently along the ridge heading east by southeast.  Then the pad became much steeper for the next 2.5 km and disappeared often, into thick, fire regrowth scrub.

At the 5km point, we turned south by southeast for about 0.5 km to reach the end of the King Spur and then continued east by northeast for 1.5 km along the spur through patches of regrowth to the end of the spur.  At that point, there was a good view of Mt Koonika across a deep valley.  The actual pad is due east across a saddle, which joins King Spur to Mt Koonika, which is a lot easier than it appears to be. 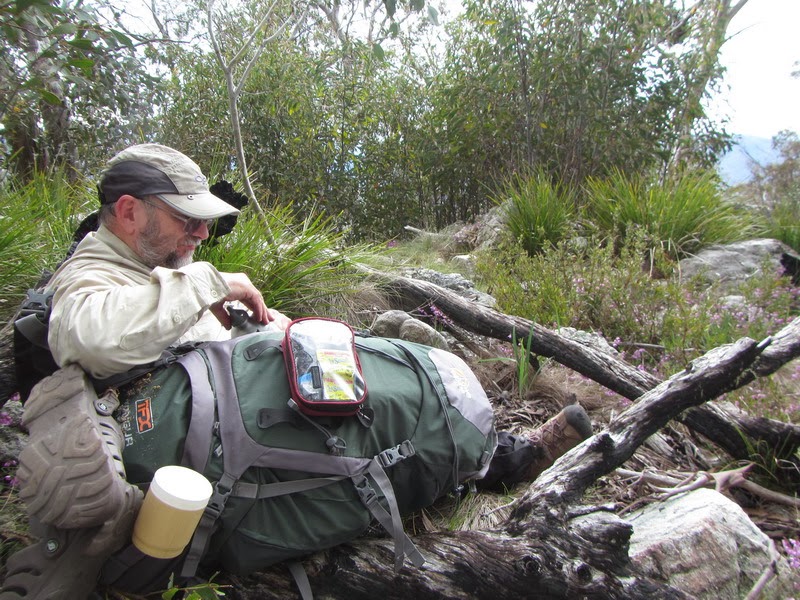 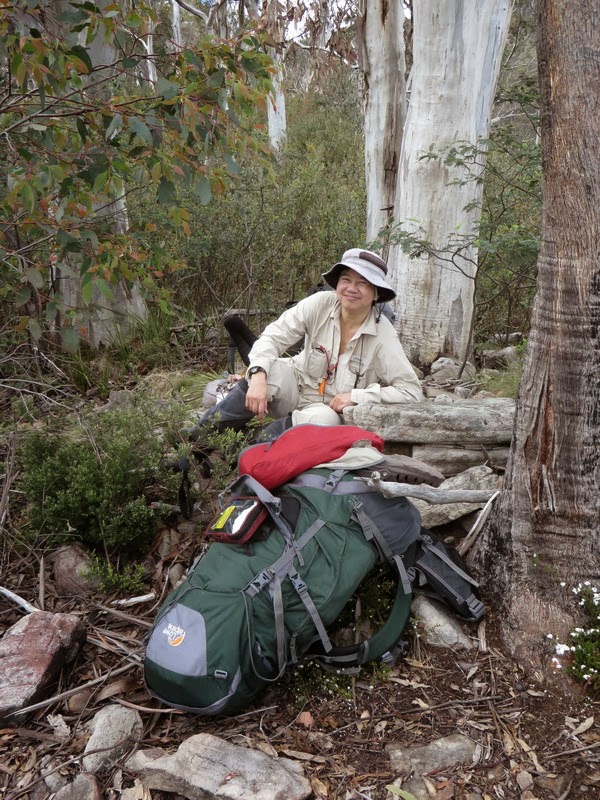 By the time we got to the cliffs of Mt Koonika, we were almost running out of time and water and were unable to find access to the top of Mt Koonika, and so we made camp at a flatish area, which was back down on the pad. 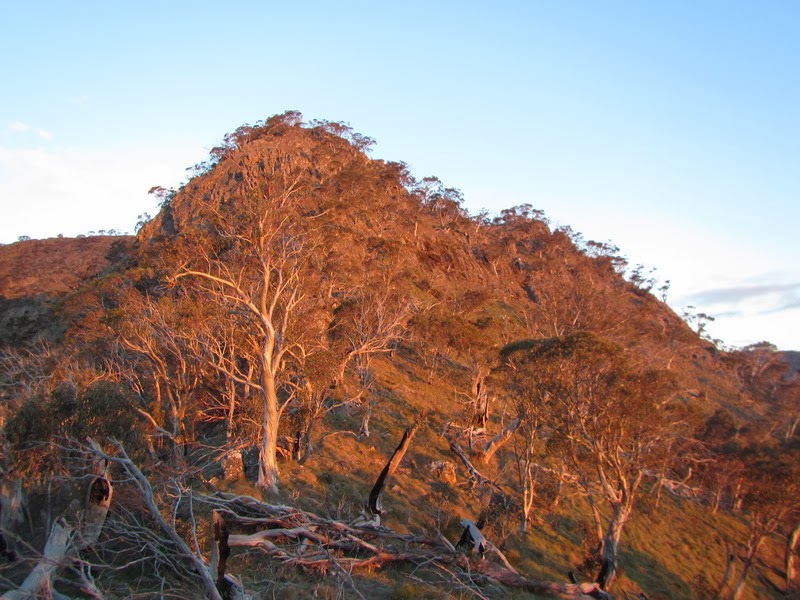 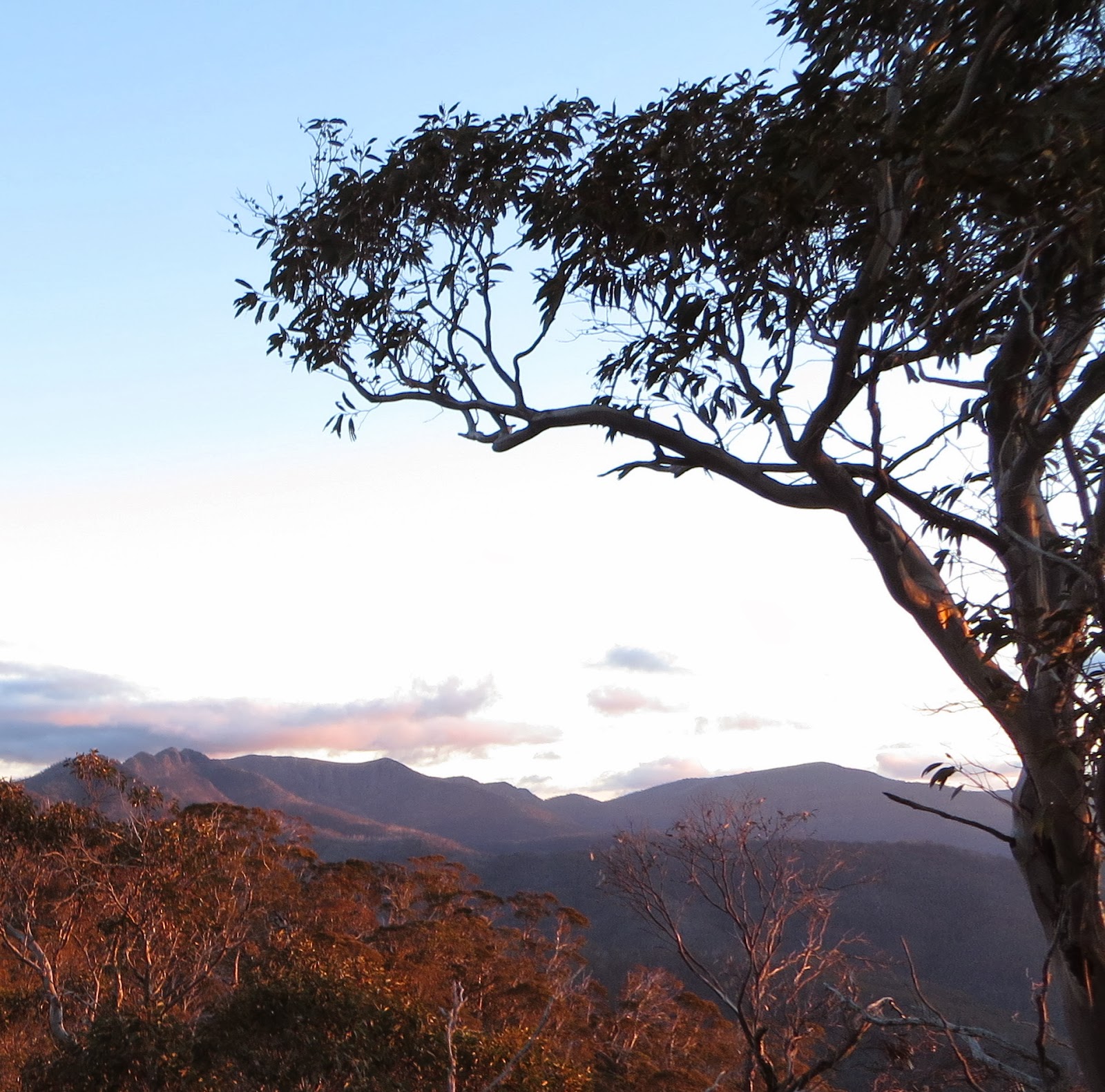 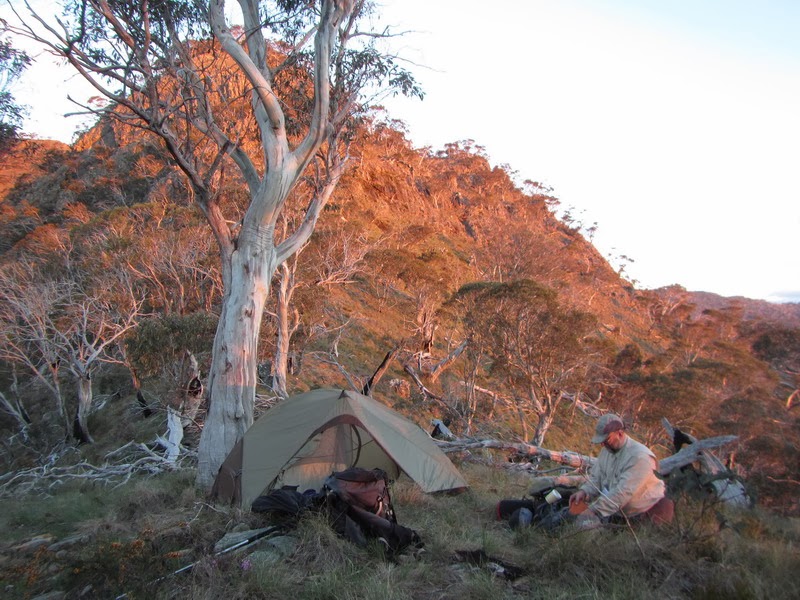 We were bluffed and so back here!

It was a beautiful sunset that night and sunrise the next morning.  However, being low on water, we decided to return to the start of the walk, instead of risking a steep climb to find the top of Mt Koonika. 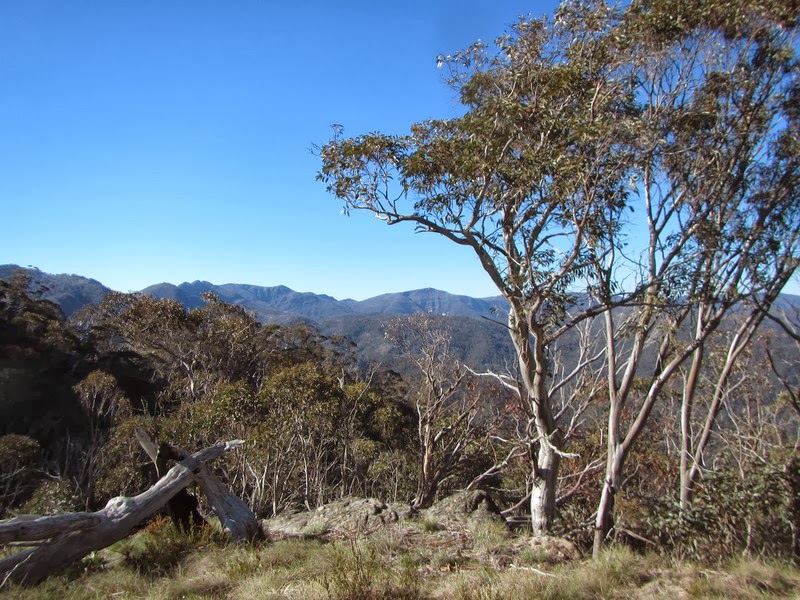 A warm forecast for the day

On the way down, we lost the King Spur ridge a few times due to the heavy scrub and that meant that we had to climb up several steep valley slopes to get back to the ridge.

However, we were able to take the correct pad (suggested by the guidebook) at the end of the walk, to the river, where we got a drink and a wash.

All in all, I enjoyed the King Spur ridge.  Allan did not.  It was too much for him and he does not want to do it again.  He is 60 year old and a bit over-weight.  On the contrary, I (50+) still want to tackle the circuit and very much look forward to it.

To be honest, we did not have time for the research of this walk.  Some useful tracknotes in relation to the final climb up to Mt Koonika summit were found later on.

Maps edited before and after the walk include: 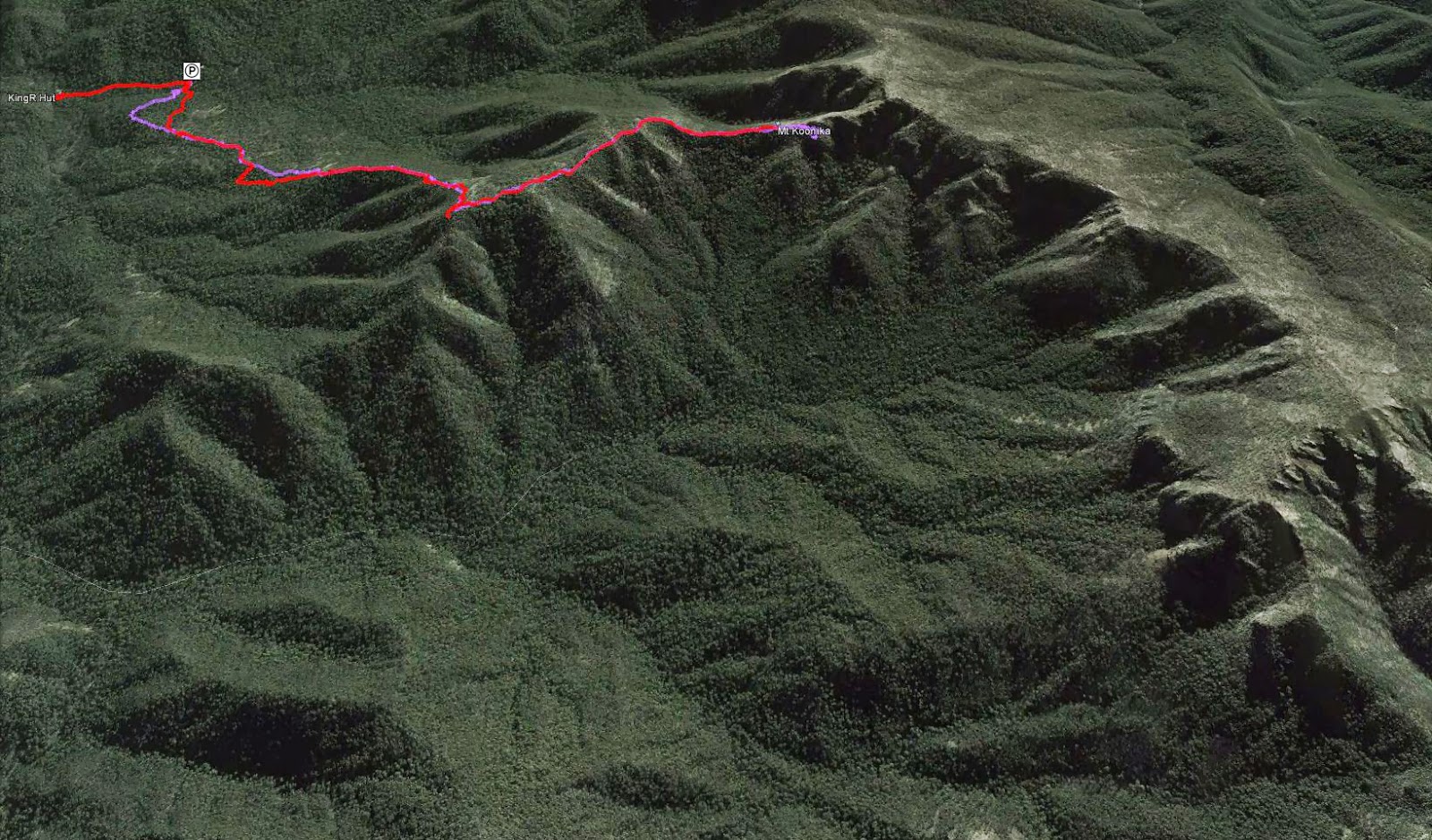 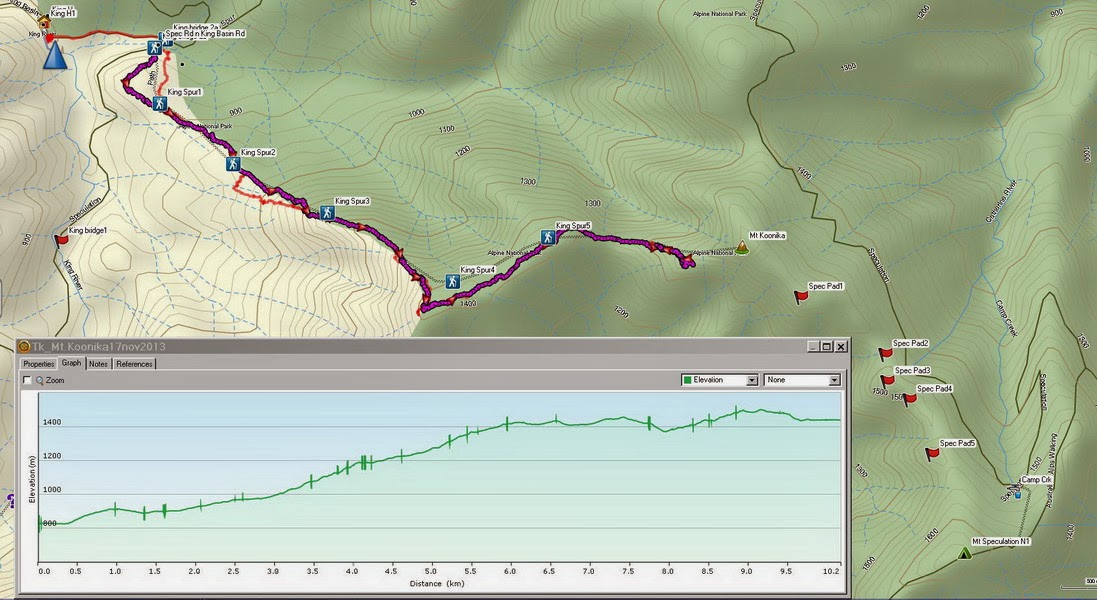 Walk-in track, profile and waypoints for Day One on Garmin Topo 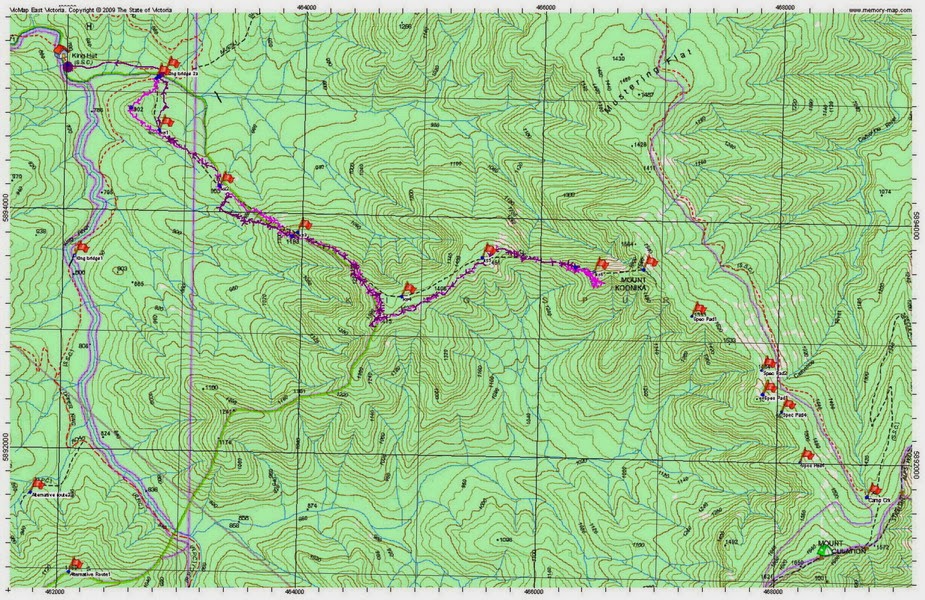 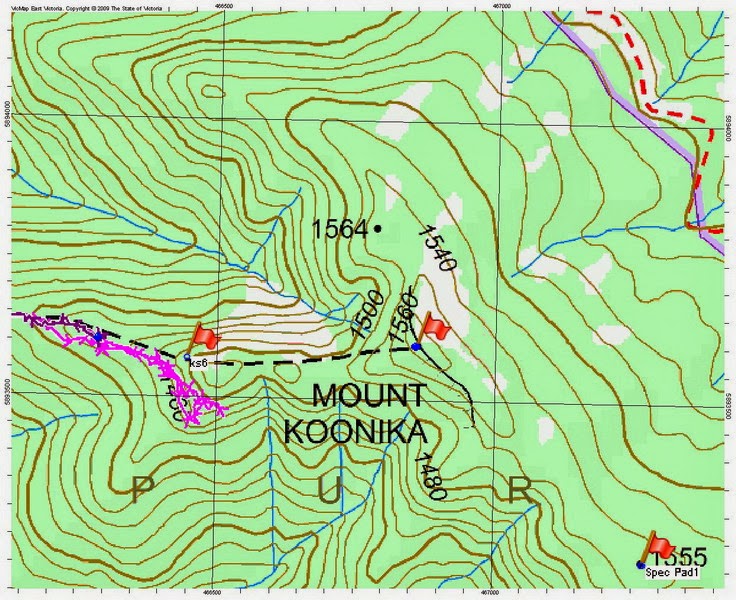 "Go left around the rock band and then scramble up through the rock & grass"
The ks6 waypoint appeared to be missing on my GPS. 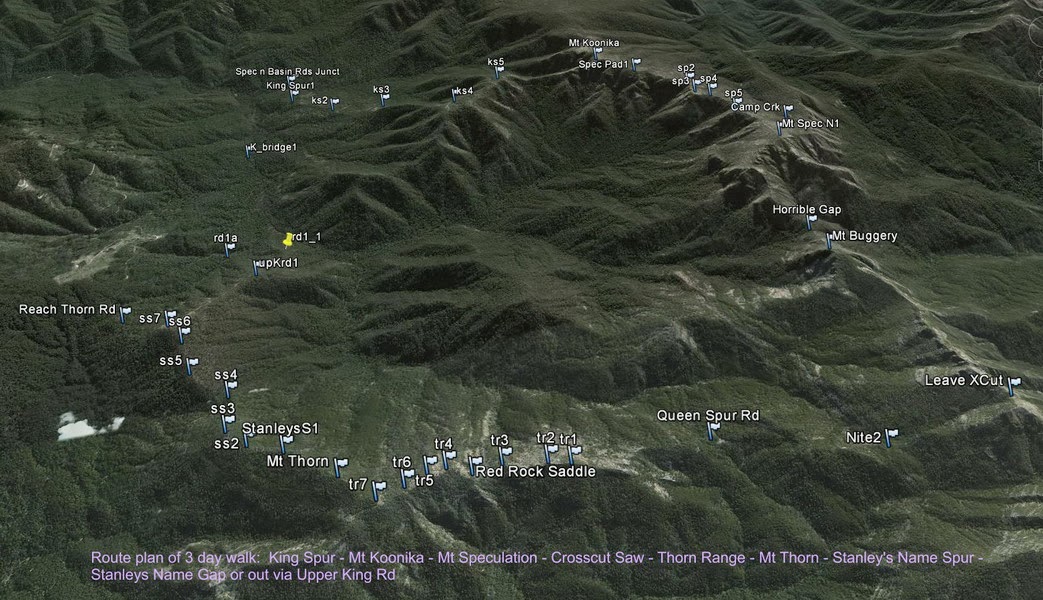